AND Festival 2017 Wrap-up: It is an Unknown World - Abandon Normal Devices

AND Festival 2017 Wrap-up: It is an Unknown World

As the weeks unfold after Abandon Normal Devices Festival, 2017 we have collected some key images mapping different aspects of the festival – from peaks to caverns, deep-time to dis-location. The philosopher and occasional art critic, Brian Holmes has remarked that making images of the world is the first step to remaking it. In the below photographs by Chris Foster Photography, we begin the process of reflecting and evaluating what we built.

One of the most iconic moments of this year was watching the deep electric-blue hues grow ever richer, caught by the smoke as it flowed in and around Winnats Pass. Each night thousands of people made the journey up to the Pass and as they immersed themselves in Daan Roosegaarde and Studio Roosegaarde’s Waterlicht, they were reminded that, many millions of years ago, what they were standing on used to be a seabed. 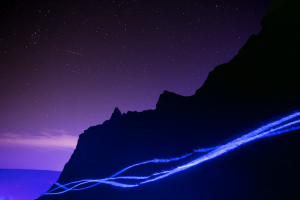 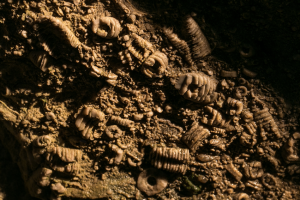 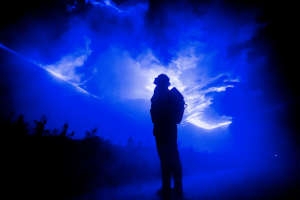 In My Wall is Your Filter Bubble (MWiYFB) many journeyed through fields of pastoral beauty – reminiscent of the type of ‘England’ written about in Edwardian novels. Carrying 21st century handheld screens they were looking to unearth stories on the spatial politics of borders, bubbles and echo chambers. MWiYFB is one of the first projects to experiment with exhibition-making,  augmented reality tools and a rural site-specific location, and will tour to Mexico City in 2018. 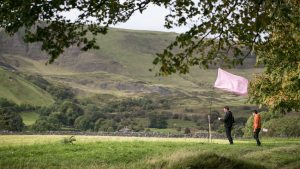 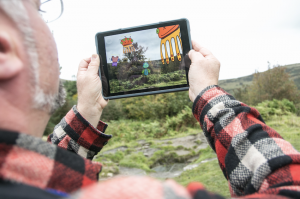 Steve Maher’s Heavy Metal Detector project saw the artist adopt the position of the critical-flaneur. Every day across the festival he lead groups of visitors through the winding streets of the village, asking them to rethink the surrounding public space in terms of DIY distribution processes integral to many Heavy Metal music and Hard Rock sub-cultures. 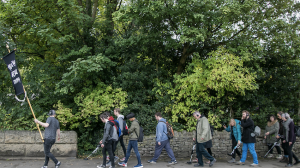 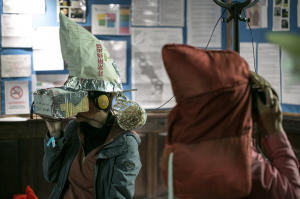 A selection of talks, tours, screenings, installations, and demos, took over Castleton village, housed in sites such as an abandoned petrol station to the inside of Peveril Castle. In a location fondly described as the “Town Ditch” many found themselves being asked to descend into a virtual subterranean space peeling away layer-after-layer of a carefully crafted world in We Dwell Below. The installation brings together animation and emerging lens-based and data-driven technologies culminating in a frolicsome, mischievous and ludic adventure. Expect the work to tour the UK next year, so please keep an eye out on our website for more details. 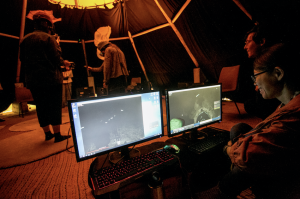 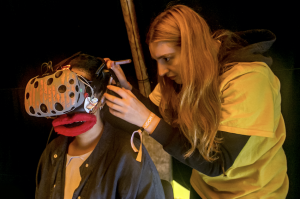 Underground, in Listening to the Dark, a triptych of sonic installations took different paths to igniting auditory hallucinations in our minds eye. Drawing on the history of rope-making, Beatrice Dillon’s Listening to the Dark residency culminated in a new work called, Taut Line that asked visitors to tap into their personal and internal rhythms as they listened inside the ancient rock formation. The next iteration of the work will take place at Somerset House Studios on 07 December. 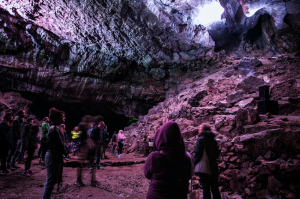 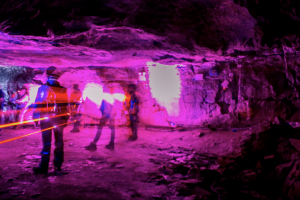 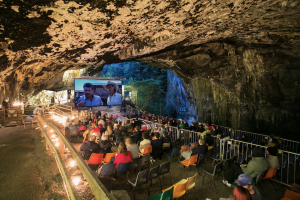 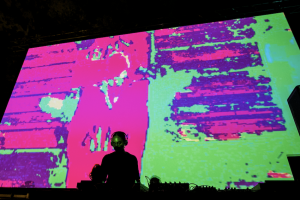 Further out from the heart of Castleton Village, Treak Cliff Cavern was home to the Digital Dark Ages exhibition. The project took visitors on a journey through vast temporal and spatial scales, asking them to rethink the cultures of keeping, sharing and storing media for the long term. Shift Register (Jamie Allen and Martin Howse) created a multimedia sound installation, Earth Observatory Array Elements – Treak Cliff, an intervention into the cavern through a number of different technoscientific mappings. Using a range of different scientific experiments and techniques, they independently collected the cosmic, terrestrial and telemetric signals being filtered through the earth. They then transformed the datum they measured and translated it into sound, stored it in obtuse instrumentation, and communicated it via elaborate fiction-making. 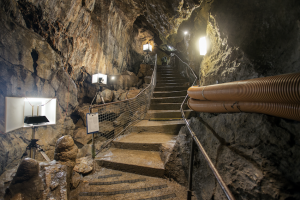 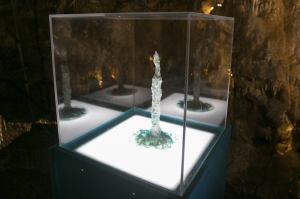 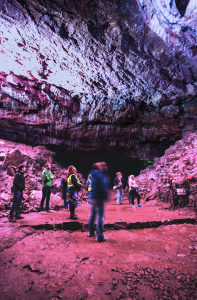 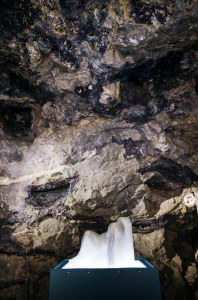 All images by Chris Foster Photography. Credits from top to bottom: Daan Roosegaarde and Studio Roosegaarde, WATERLICHT; a close-up shot of the fossils in Treak Cliff Cavern; a visitor admiring Daan Roosegaarde and Studio Roosegaarde’s WATERLICHT; visitor’s interacting with My Wall is Your Filter Bubble curated by Matthew Plummer-Fernandez and Doreen A. Rios; a close-up of Arcangelo Constantini’s Bakteria in My Wall is Your Filter Bubble; Steve Maher takes visitor’s on a walk in Heavy Metal Detector; visitor’s watching the 360* video A Walk in Fukishima by Don’t Follow the Wind; an installation shot of We Dwell Below by Ooni Studio with concept and direction by Laura Juo-Hsin Chen; an AND 17 volunteer helps a visitor don on a headset for We Dwell Below; Beatrice Dillon’s Taut Line a new work created as part of her Listening to the Dark residency; Mark Fell’s Extensionless Thought Points; crowds watch Tremors (Dir. Ron Underwood) as part of the Horror Movie Spelunker Double Bill in Peak Cavern; Nkisi performs The Dark Orchestra in Peak Cavern; Earth Observatory Array Elements – Treak Cliff by Shift Register (Jamie Allen and Martin Howse); Thomas Thwaites in collaboration with Sioban Imms’ Chromobytes installation; Beatrice Dillon Taut Line; ROOT 0082 by Simone C Niquille.