An exploration into the digital freeport

nnn.freeport.global was launched in 2018 to explore alternative ways of presenting and distributing artworks on digital platforms. Since its conception, 12 artists have showcased their work, including three new commissions, using the platform to inform how they present and explore digital citizenship and identity. The platform was created by PWR who experimented with the peer-to-peer, content-addressed system IPFS (Interplanetary File System) as backend, with the platform acting as a hybrid HTTP/IPFS gateway to the artworks and content (technical video explainer below).

The three commissions by Geocinema, !Mediengruppe Bitnik + Omsk Social Club and Kyriaki Goni, were presented both on the platform and in the exhibition FREEPORT: Terminal MCR, Salford in February 2019, and are explored further here.

Geocinema’s evolving curation of content on nnn.freeport.global demonstrates a vast research project which they embarked on through Framing Territories to explore planetary-scale sensory networks and their relation to the cinematic process. While plotting their next documentary, Geocinema has been tracing the imaging of earth along with its supporting infrastructures. Circulating between an empty cinema hall, bureaus of the Chinese Science Academy, an ancient weather observatory and a satellite ground station in Sri Racha, Thailand, — their research departs from the Digital Belt and Road, the Chinese-led Big Data program, aiming to synchronise Earth Observation Data towards modernity based on predictability.

On nnn.freeport.global, data-sets constellate into various forms of interpretations which map out the nearest-future forecasts. By being attentive to how data is identified, collected and transmitted, what comes to the fore is how various embodiments of these remote-infrastructures along with their predetermined ways of seeing are feeding back into geographies, not limited to the interiors of China.

On nnn.freeport.global, !Mediengruppe Bitnik + Omsk Social Club showcases RaveEnabler – the inner workings of mining technology used for CryptoRave. The NNN commission enabled the growth of this experimental online community of raver’s through the development of the mining technology RaveEnabler, allowing hundreds of people to mine for their tickets using blockchain technology. Through discussions surrounding the resistance of traditional currencies at the accompanying talks programme FREEPORT: Critical, a new vision of value and economics was explored, connecting back to the historical resistance of traditional values from the rave community back in the 1980s.

Through RaveEnabler, the community not only experimented with the use of crypto mining as a sustainable method to fund CryptoRave events, but also used layers of Real Game Play (RGP) to provide unique roles to the participants who attend. On the freeport is a curation of screenshots found online, documenting the journey of ravers from the mining process to social media posts at each rave. Across the lifespan of the NNN, CryptoRaves had been hosted by partner organisations Transmediale and STRP, actively engaging people in the cryptomining community.

As part of Networks of Trust in the Archipelago, Kyriaki Goni uses nnn.freeport.global to present a collection of visual documentation and diary entries from research trips to the Aegean archipelago; an uneven distribution of islands between Greece and Turkey. Building a collective of narratives from island residents, Goni’s research challenged the centralisation of infrastructure, information and governance with user-generated content acting as both a time capsule and a gateway to the future.

Goni’s images and video documentation are an insight of the densely packed landscape surrounding the Aegean archipelago, fusing the histories of intricate physical and digital networks that make up centuries of connections between the islands inhabitants. ‘To Survive on the fragments, you must be a fragment yourself‘, reads an extract from Goni’s ‘A story: chapter one’.

In Goni’s essay Living on the sea surrounded by the sea, she explains: ‘In this new era the Archipelago poses the urgency of reenacting myths and redefining traditional craftsmanship, dedication and cooperation in order to maintain and to create new connections and webs of trust. The Archipelago is the most suitable territory for reactivating the networks and the connections in order to preserve the most precious piece of memory and information. Thus it is here, on the Aegean archipelago, that we propose the creation of the Aegean Datahaven, returning the lessons of the Internet to the ancient networks of trust and cooperation which preceded them.’ 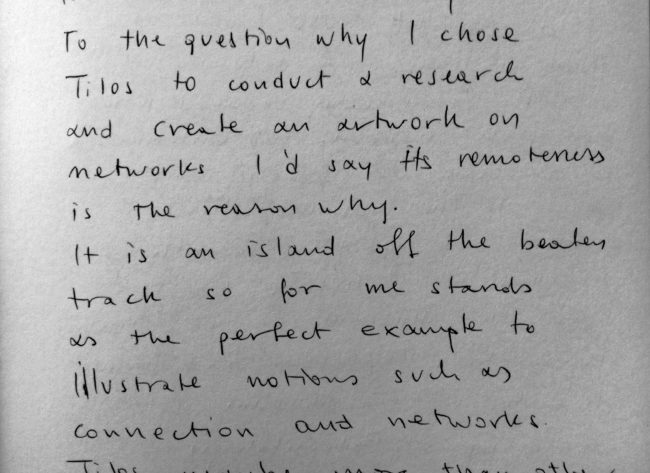 Watch the live stream of FREEPORT: Critical; a talks programme accompanying our NNN exhibition FREEPORT: Terminal MCR featuring our commissioned artists and world leading thinkers exploring the fundamental themes of the exhibition including blockchain, digital citizenship and the social impact of online currencies.

nnn.freeport.global was part of The New Networked Normal  (NNN). The NNN explores art, technology and citizenship in the age of the Internet, a partnership project by Abandon Normal Devices (UK), Centre de Cultura Contemporània de Barcelona (ES), The Influencers (ES), Transmediale (DE) and STRP (NL). This project has been co-funded with support from the Creative Europe programme.