The Body is Not a Sovereign Object: Introducing Toxicity's Reach - Abandon Normal Devices

The Body is Not a Sovereign Object: Introducing Toxicity’s Reach

Dani Admiss, Curator of AND Festival 2021 exhibition Toxicity’s Reach opening Thursday 27 May 2021, introduces exhibiting artists Mary Maggic, Dr Luiza Prado de O. Martins and Sissel Marie Tonn and explores the way we are entangled within the chemicals found in the bodies of water we live near and depend on.

The Mersey estuary in Liverpool has a long legacy of receiving polluting inputs from a variety of anthropogenic (human) sources along its water course. In the eighteenth century, the textile, tanning, pottery, and mining industries – from Manchester to the Midlands – used chemicals to fix, bleach, and separate matter that poured straight into its brackish waters. In the twentieth century, herbicides, pesticides, and fertilisers used in industrialised agriculture helped to create a culture of monocrops; the manufacture of plastic food packaging slowed bacterial growth; the contraceptive pill was used to regulate and control fertility; and much more. Synthetic chemicals helped make possible the standardisation and segregation of food, spaces, and bodies (Liboiron, Tironi, & Calvillo, 2018; Wylie, 2018). They facilitated and fed mass-markets and continue to find their way into the estuary today. 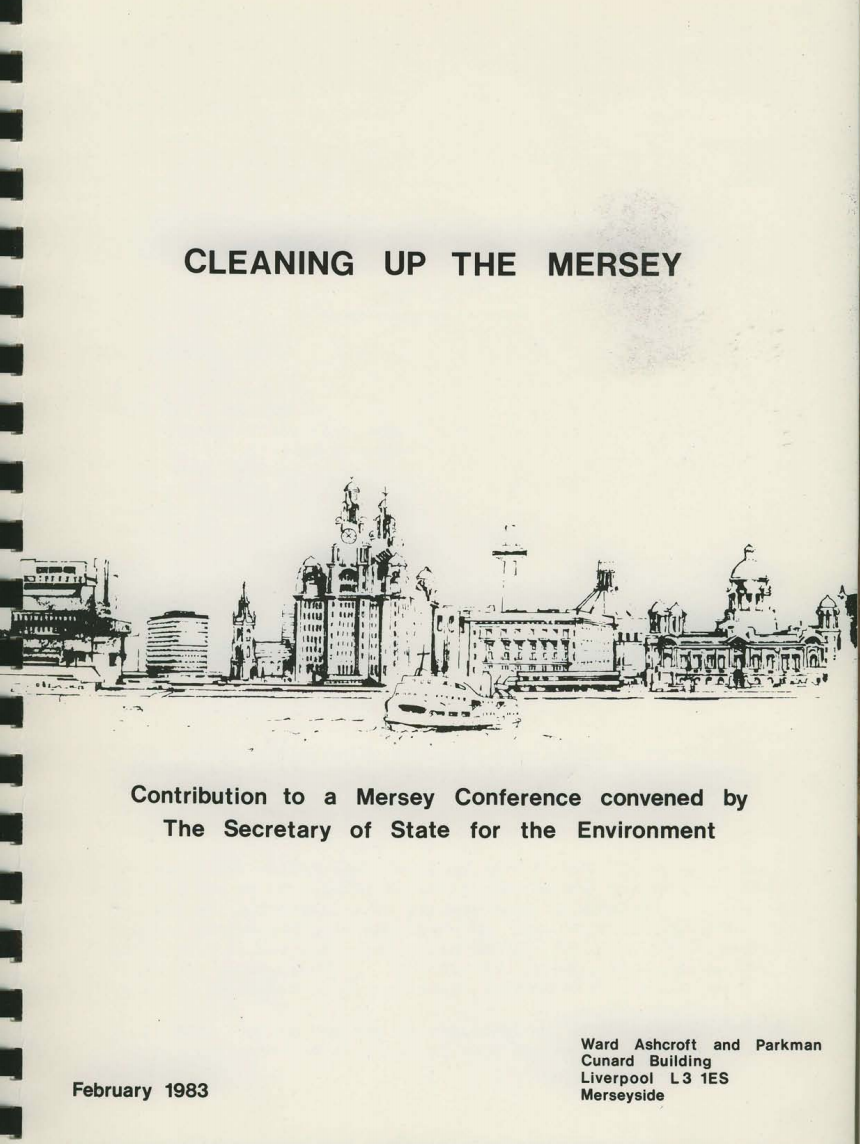 The increase of synthetic chemicals into our worlds has had mixed results. On one hand they have resulted in tremendous societal benefits including fighting disease and making everyday life easier for many. However, with their widespread use, they have proliferated into our landscapes and waterways through dumping, discarding, leaking and leaching causing health and ecological concerns. The modern organisation and categorisation of our worlds through synthetic chemicals has helped cement and promote a worldview that our modes of existence in cities are outside of the ecosystems and environments we live in. Chemicals have played a role in creating an earth where petrochemicals, pharmaceuticals, plastics, care products and fertilisers are imagined not to affect the world beyond their designated purpose (Keller, 2000), and synthetic chemicals that originally acted as stabilising agents (for some, not others) have ended up destabilising us all. Furthermore, the myth that we are physically and ideologically segregated from these chemicals has resulted in a lack of understanding about how micro-polluting chemicals colonise worlds as they move through soils, seas, and bodies.

Toxicity’s Reach presents three newly commissioned artworks by Mary Maggic, Luiza Prado de O. Martins and Sissel Marie Tonn. The exhibition considers the many ways in which people are entangled with micro-polluting chemicals found in the Mersey today. These life-altering toxicants actively shape bodies, weaving together different values from pasts toward futures, creating unknown and unexpected life conditions. The exhibition is accompanied by a digital repository, exposing how contaminants of emerging concern ‘came into being’ in the Mersey and beyond. Each element of the project recognises that toxicity is historically embedded within related contexts and creates new relationships and unexpected conditions between things that are made through processes of chemical exposure and polluting.

Mary Maggic’s Estroworld Now: The Quarantine Edition seeks to undo ways of seeing and doing that uphold a fantasy of separation between us and the effects of endocrine-disrupting chemicals (EDCs). Comprising a series of navigable digital 3D models of a home in the North West, in this fictional universe users can explore specially-created wallpapers and consumer items plastered with adverts. The result is a digital doll’s house where each surface pops, flashing with coded messages and meanings; a stimulus overload in their brilliantly satirical faux-pop aesthetic. The Estroworld acts as a toxic consciousness, creating a promise of a lifestyle that removes some (not others) from the penetration of home-invading micro-polluting chemicals is a dangerous albeit comforting fiction. In Estroworld, the household items that are sold to consumers peddle the promise of ‘beauty’, ‘sterility’ and ‘purity’, but have been selected by Maggic as they are made from materials known as having hormone-disrupting effects. It is the ultimate consumerist ideal of “Buy now, Pay later” – where a feeling of purity today means the possibility of sterility for future generations to come. 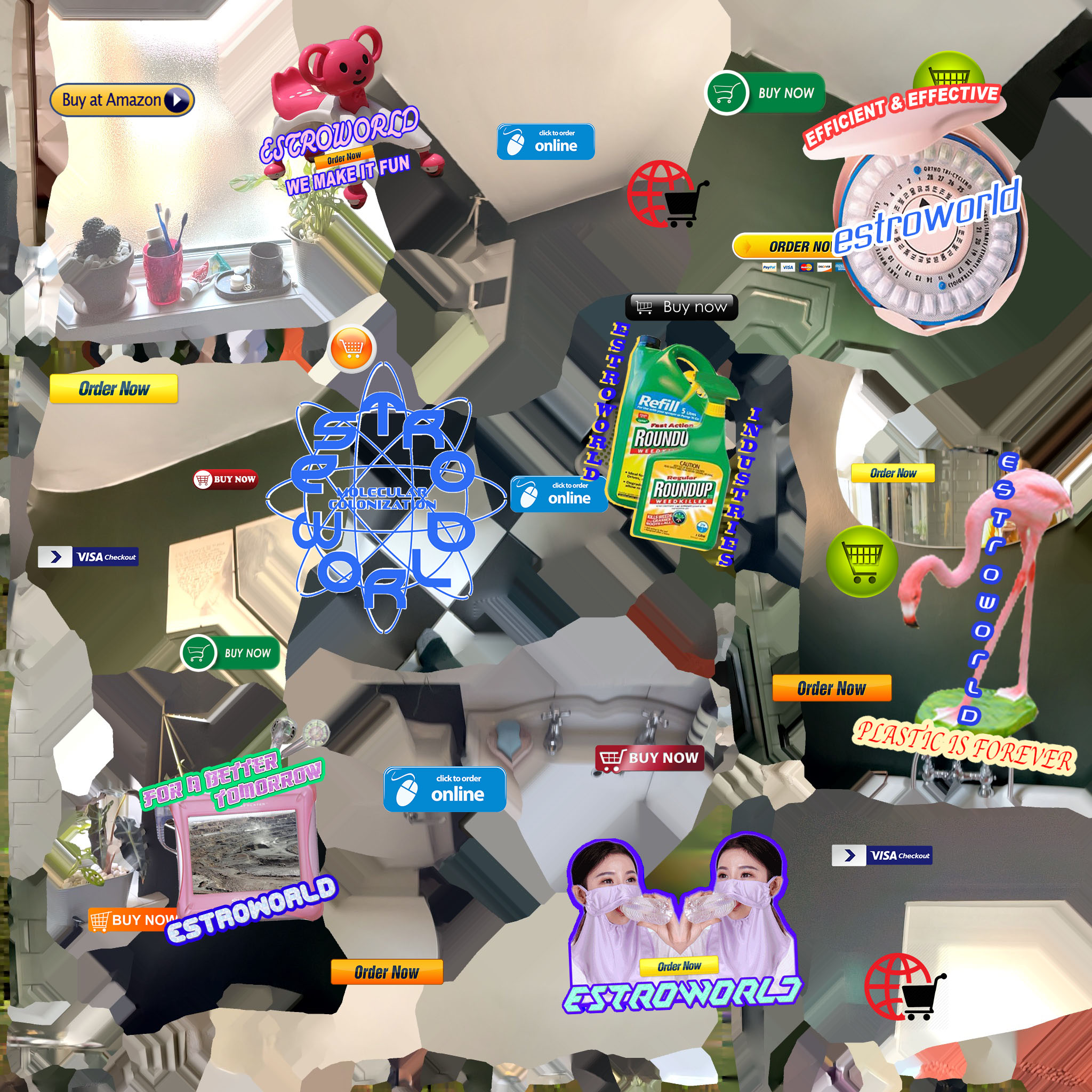 From pollution to colonialism, bodies bear the hallmarks of extensive violence. Luiza Prado de O. Martins’ The Sea Collapsed into the Pleasures of Sand is a poetic inquiry into the ways in which Land and Water reproduce and carry these burdens. Research on endocrine-disruption has often tended to prioritise bodily health, fertility and social reproduction. In the form of a speculative GIF essay, Martins departs from the root of the word Mersey – meaning boundary – to create a liminal space where the extended dimensions of endocrine-disruption, Land-relations and queer chemical encounters meet. Across these thresholds, she treats the very movement of water as a symbolic journey, one she refers to as the “birth canal of modernity”. The violence executed by industrial acts of pollution, is not limited to living with the ecological effects of man-made disasters and arguing for rights and access to life-giving resources; it also includes denying other worldviews and value systems, actively erasing other ways of living, being and doing. GIFs often change their meaning over time, bypassing formal modes of communication in favour of the action of flood-affect-reset. In The Sea Collapsed into the Pleasures of Sand, the GIF is a doorway into another form of storytelling, broadening the ways we come to know about our worlds and how we value them. In her latest work the Mersey becomes an allegorical conduit, shapeshifting between the living and the ancestral, Empire and petrocultures (the social imaginaries resulting from the consumption of, and subsequent dependence on oil), fluid and fixed, human and more-than.

Sissel Marie Tonn’s fascination with what interacting with industrial compounds means for public and ecological health is unpacked in Plastic Hypersea (the spill), a fragmented science fiction film told through many different “pools”. Human cultures are replete with evolutionary origin stories that evoke modes of kinship between humans and bodies of water (Alaimo, 2016). Our blood, interstitial fluids, gastric juices, sweat, and urine are daily reminders of this shared watery beginning. This is known as Hypersea, a biological concept describing an interconnected network of nutrient-filled fluids flowing through all land-based organisms (McMenamin & McMenamin, 1997). In the spill, Tonn responds to the fact that there is more plastic in the Mersey than there is in the Great Pacific Garbage Patch (Greenpeace, 2019). In her speculative fable about a shared “eco-immunology”, Tonn asks viewers to think about body-environment entanglements (material, metaphorical) evoking self and non-self-relations. The spill  is purposefully not the last word on the immunological self, but it certainly forces us to reconsider plastic pollutions’ contribution to the metaphysics of human identity. 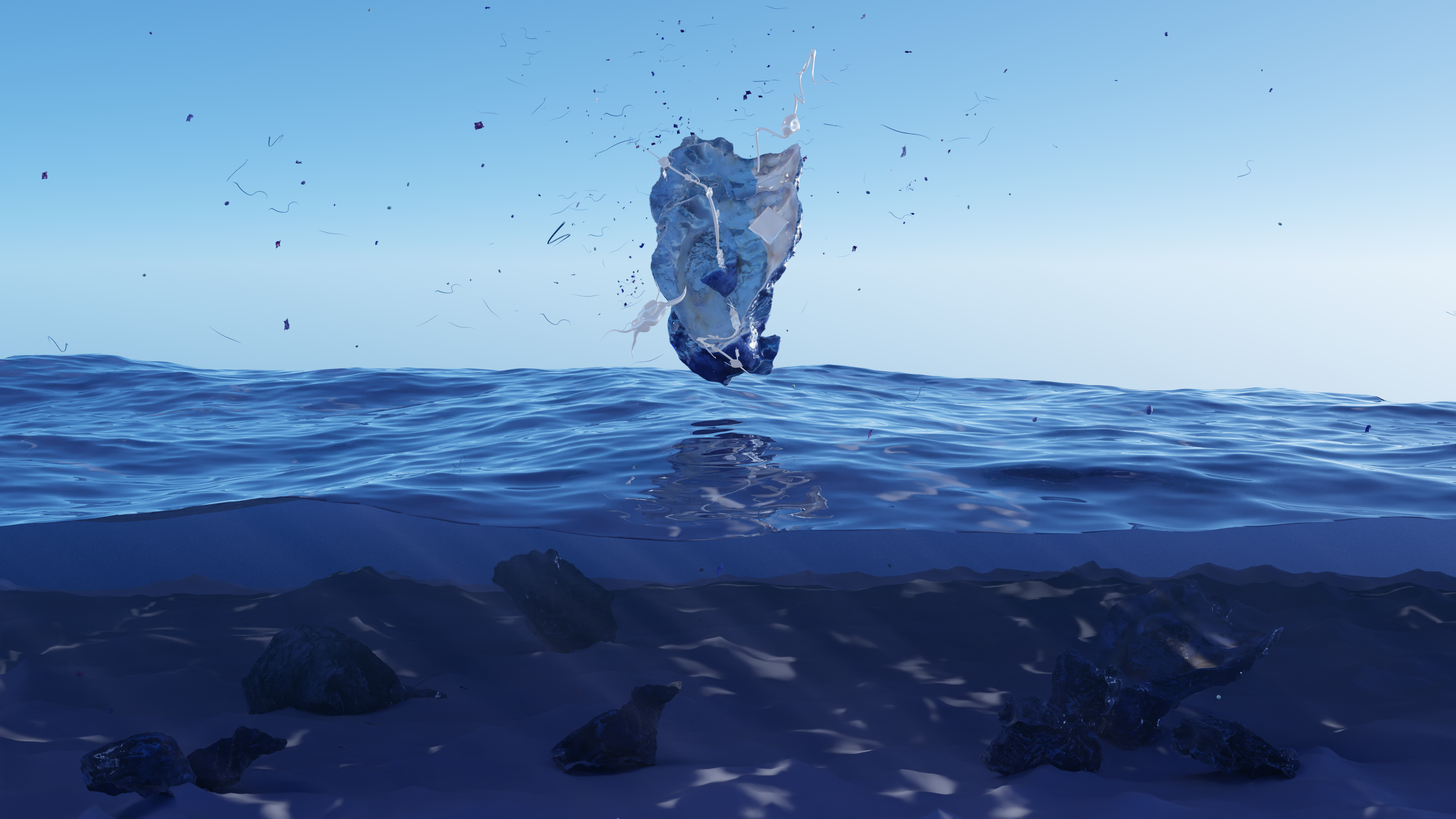 Tracing chemical relations and imaginaries is a way to connect multiscalar, multi-sited phenomena. The works in Toxicity’s Reach show that the body is not a sovereign object. Instead, the pieces in the exhibition illustrate to us how toxicants that have been used to segregate and compartmentalise our worlds, furthering the divide between humans and the environment they live in, generate risky conditions for our future survival. The works expose the social and bodily densities that scientific, regulatory, social, and linguistic boundaries are meant to protect, but often erase or overlook. In their works, the artists in Toxicity’s Reach recognise that bodies are porous (some more than others) and that all humans live in interdependent worlds. In their experimentation with frameworks that articulate how toxins move through our worlds, affecting us and our environments, the artists call for an urgent and mutual reorganisation of our world – a more fitting clean-up for those yet to come. 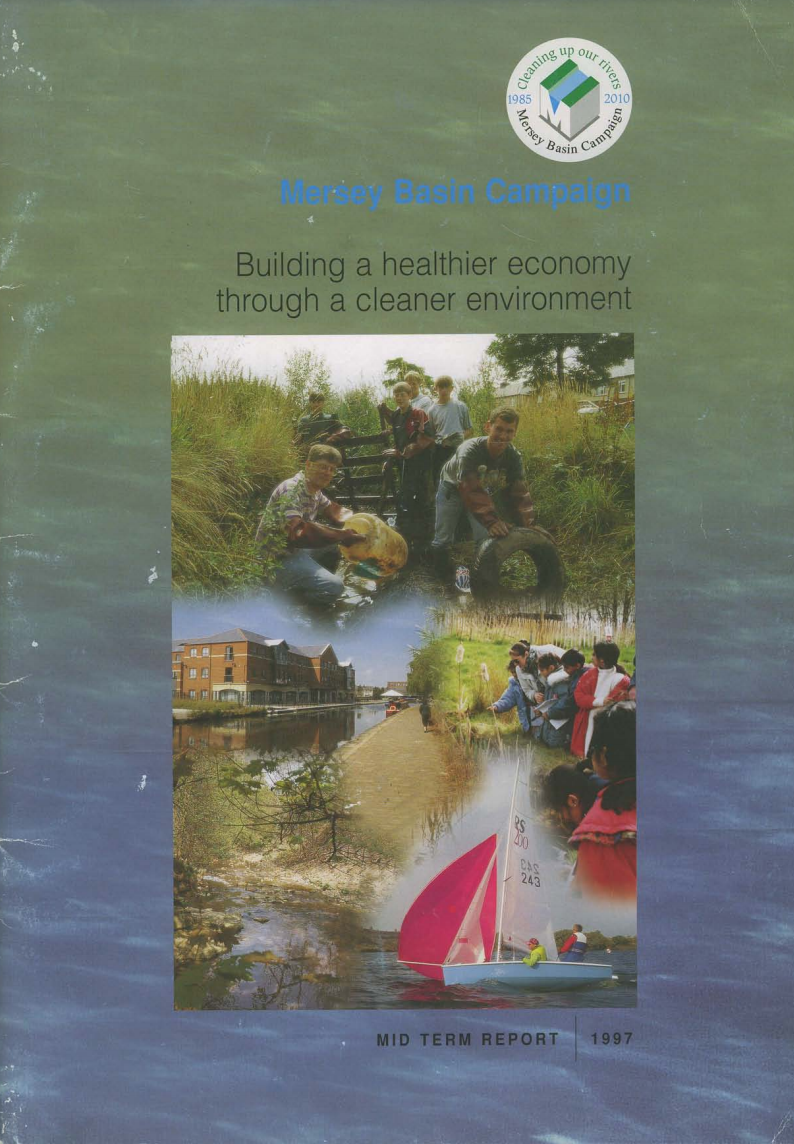 Dani Admiss is an independent Iranian-English curator and researcher based in Edinburgh and curator of Toxicity’s Reach. She is currently a Stanley Picker Fellow (2020-22) at Stanley Picker Gallery and Kingston University, London, curator at transmediale 2021-22: for refusal, Berlin, and runs Dark Conservation, a long-term curatorial research project that rethinks the role of ecological conservation practices in expanded contexts.

Toxicity’s Reach will go live Thursday 27 May alongside the launch of AND Festival 2021. Explore the full programme: andfestival.org.uk/whats-on

The Sea Collapsed into the Pleasures of Sand, Luiza Prado de O. Martins (2021)

The beginning of the Mersey Basin Campaign, a regeneration project for the estuary. Letter from Michael Heseltine and Government Consultation Paper (Department of the Environment, 1983).