Unique art deco steam ship the Daniel Adamson (The Danny), will be the vessel for Kate Davies’ AND Festival 2021 commission By the Sound of Things. Transporting passengers down the Manchester Ship Canal over the closing weekend of the festival, 9 – 11 July, audiences will be enveloped within an immersive audiovisual experience created with deep sea hydrophone recordings (a microphone designed to be used underwater for recording or listening to underwater sound), depicting the marine ecosystem disrupted by man-made ship noise. Audiences will be invited to feel the vast echoes and epic scale of the modern shipping industry, considering the impact of our consumerism on local and global environments.

As an integral piece of shipping history built in 1903, The Danny (previously named the Ralph Brocklebank) was originally a working tug boat, playing a small but vital role amongst International trading networks within the canals of the North West. After WWI, canal traffic declined as companies turned to road and rail to move goods; the Danny was then given a radical Art Deco style refit by her new owner to see her fit for purpose as a passenger boat. It was then that her name changed to that of the ship canal’s founding father and first Manchester Ship Canal Company (MSCC) chairman, Daniel Adamson. 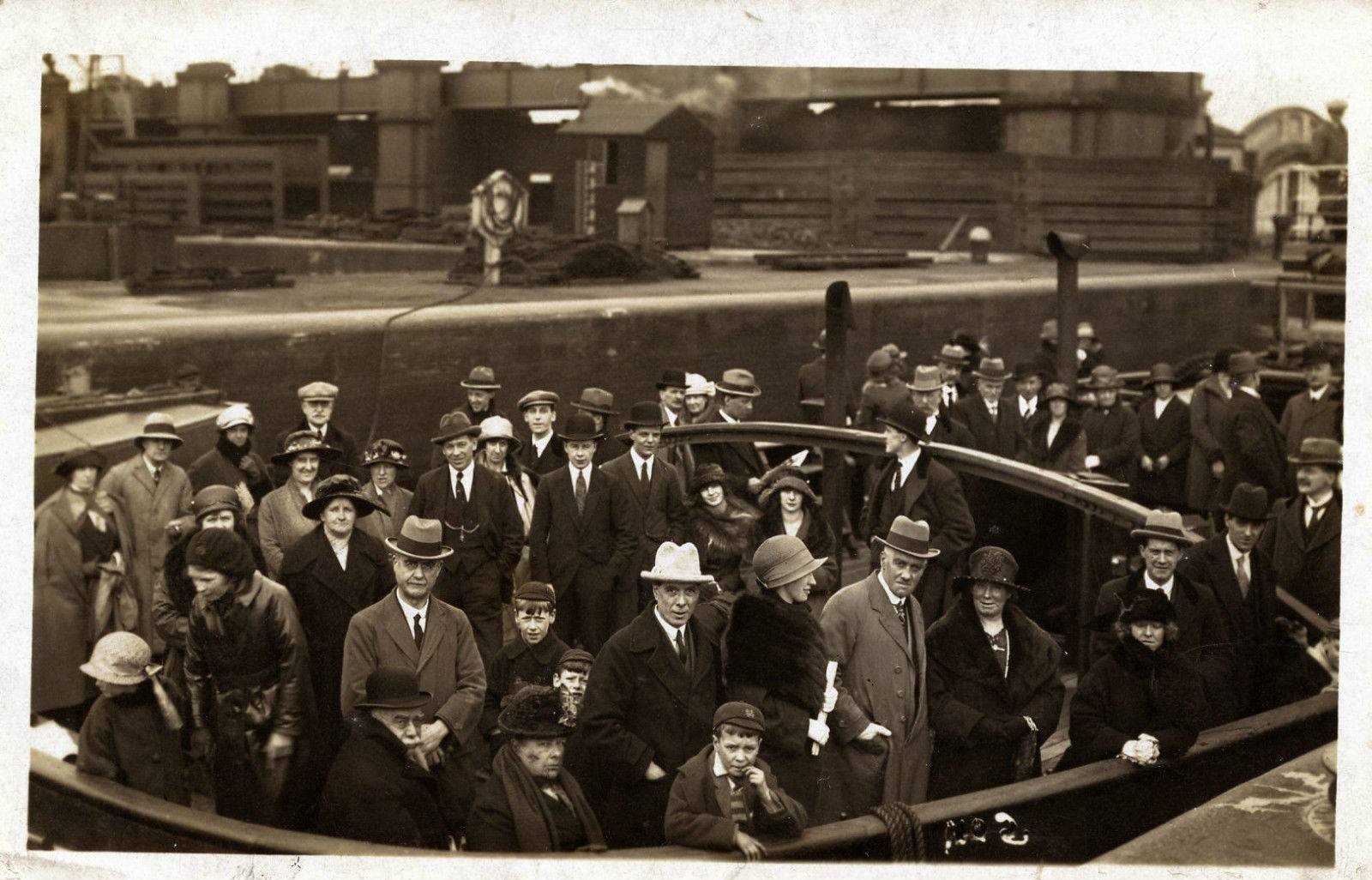 A small but incredibly powerful canal tug, the Daniel Adamson was built to tow long strings of barges laden with goods from the inland towns of Cheshire and the Potteries to the great seaport of Liverpool. She made her appearance on the Mersey at a time when sailing ships jostled for space on the Liverpool waterfront with the great steamships and ocean liners of the Edwardian era.

Tricia Coleman, who is currently producing By the Sound of Things for AND Festival, talks about what audiences might learn from being onboard The Danny:

Unpicking the history of The Danny, the Manchester Ship Canal, the manufacturing industries they served and the communities that these industries supported reminds us what we sacrifice when we support contemporary global free market systems producing and trading everyday ‘things’.

Everything we buy from Amazon supports a manufacturing and shipping process which is materials- and labour- intensive, exploitative to communities and damaging to the environment.  The work proposes a question: how can we support local industries in a contemporary globalised consumer market?

During her years as a passenger boat, though still in demand for hospitality, The Danny is now seen as a valued tradition rather than an integral part of the working life of the ship canal. The Daniel Adamson’s decline also mirrored the demise of the ship canal: once container ships became widespread, Manchester Docks could not compete and closed in 1982. In late 1984 the MSCC decided to withdraw The Danny from service, but just as she was about to be sold for scraps, she was meticulously and lovingly renovated over two decades by a group of dedicated volunteers, re-establishing her to working condition.

From May 2016, once the renovation had been completed, a new generation of enthusiasts were able to climb aboard and marvel at this unique feat of engineering. She is believed to be the oldest, operational Mersey-built ship anywhere in the world, currently operating cruises in the same area she worked over a century ago.

Tricia: The Danny will bring charm, character and a unique context to the presentation of By the Sound of Things, and allows us to access a unique view of the Manchester Ship Canal from the water, while returning the boat to her spiritual home. The cruise offers an opportunity for audiences to give themselves over to the boat for a few hours, and time to contemplate all that Kate’s work stirs up.

We don’t often experience art in this long-form way – often it’s on our own terms – and I hope AND audiences looking for richer ways to engage with artwork will respond well to the commitment and abandon this requires. I like to think about it as creating a temporary floating conversation and community for a few hours….a ‘slow art’ intervention! 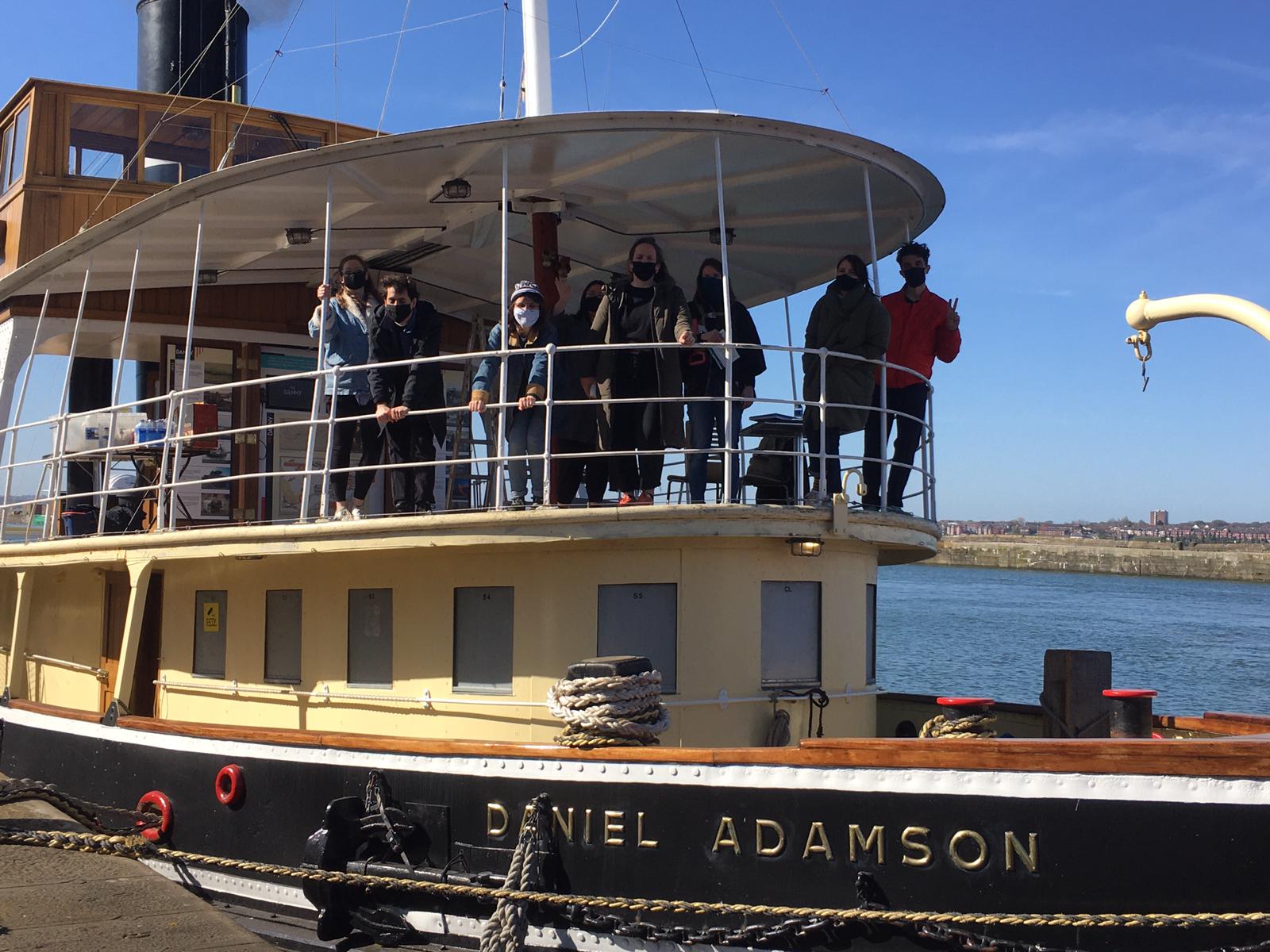 The AND Festival team on a site visit to meet The Danny!

By the Sound of Things will be presented on board the Daniel Adamson, tickets are on sale now.