Development of The Hive in Indonesia - Abandon Normal Devices

The Development of the Hive #2: Laurie Crombie

Laurie Crombie continues his journey with The Hive, and shares this thoughts and personal musings after his recent trip to Indonesia. He presented the latest working of The Hive with artists Ikbal Lubys and Tony Maryana at The Other Festival, Jakarta 2-4 November 2018 as part of UK/ID.

We went to visit the Gamelan master who had a workshop on the outskirts of town manufacturing Gamelan instruments. He sat us down and we spent time discussing a new tuning system whilst drinking sweet tea and observing the the varying calls of local cockerels. Later he showed us his skills and set about re-tuning the polished brass bars with a big old hammer and a well practiced ear. At the same time, another man made us the required resonator pipes from thin sheets of steel on a rickety jig. We also visited his house that contained a small Gamelan orchestra where we got an introduction into playing some of the instruments involved. 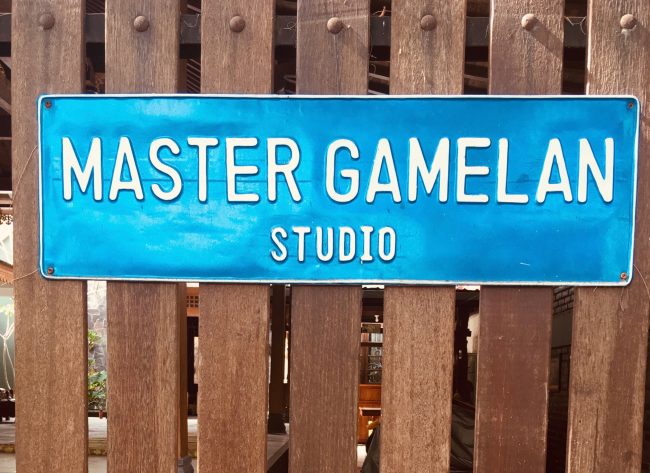 On another day when we were a bit stuck for what to use as a button to trigger the machine, Ikbal said “don’t worry!” and we got on the moped across town to a hidden yet infamous scrap yard. This was an incredible place, and unlike anything you would find in the UK. It was an old shed piled high with all manor of old bits of brass from huge bells to broken instruments which you paid for by weight. If I had not been limited by baggage weight, I would have bought all sorts of treasure. We found some bars from an old Gamelan and thought it would be cool to use these to make switches as they matched the main body of the instrument. Later that day it also happened that a neighbour was up for selling a knackered old gong at favourable price. This completed our set up for the control station. 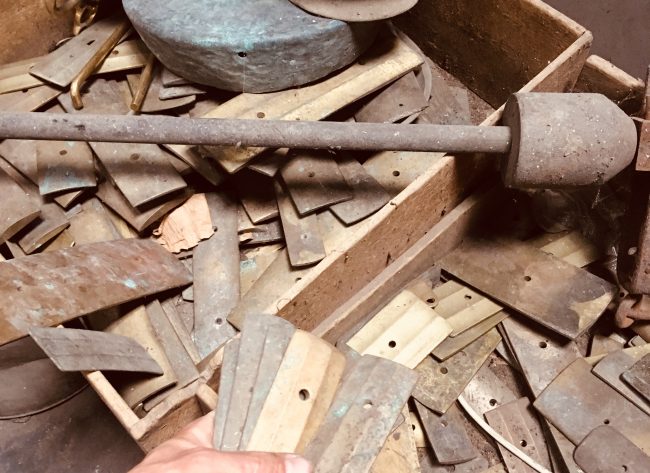 Working on The Hive in Ethnictro, Jogja

There are all sorts of superstitions in Indonesian culture and on the first day we experienced some strange goings on with the electronics for The Hive. It was only working at half power for no obvious reason, and after quite some time on the phone to Charlie in the UK talking through the lights that were or weren’t blinking no solution could be found. In a state of despair we went out for a coffee and when we returned it just decided to work. The next morning I took my flip-flops off to air my sweaty feet then got an electric shock from my computer. I exclaimed at the dodgy electrics and Tony looked at my feet and pointed out I had removed my protective footwear. So I was relieved big steel toe-caps where not needed but endeavoured to keep on my flip flops from then on…

Building The Hive in such a different climate was a challenge, but good fun. I soon realised enthusiastic physicality on the shop floor just resulted in later dehydration and a load of smelly clothes. I learnt to take it slow and chill. We were working in Ethnictro run by Ikbal and his partner Aii, a place that does music lessons and supports the local musical community. It was a social place and people would regularly drop in for a chat always showing much interest in The Hive. People where happy to give some input or help out with jobs in a very generous manner.

Quite often we needed some bits of metal, nuts or bolts, so I would go on the bike to a street full of small shops selling everything you could imagine. I had fun drawing springs, washers etc and playing game of technical charades with people in shops. I also tried to compete with the locals in a bid to carry anything on a scooter. I am no stranger to outsize baggage on a bike, but some of the things I saw people carrying were incredible. 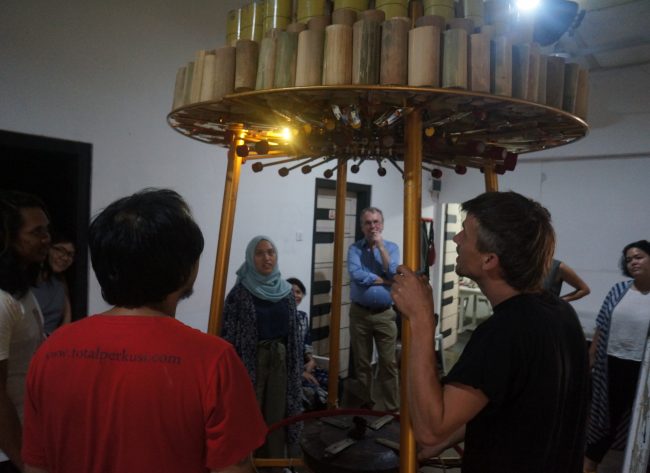 Tony and Ikbal are in the centre of the vibrant art/music scene in Jogja so had many acquaintances interested in seeing The Hive. So we decided to have an open studio and presentation in Ethnictro where we had been working. We had three open days when various composers dropped in and created compositions. Most people used a keyboard to program The Hive but we also connected up some triggers from a drum kit and a bespoke patch in Max MSP. Many people came on the day and gathered around The Hive that stood mysteriously in the middle of the room. We showed the new compositions and had an extensive talk about what The Hive did and how it worked. More people arrived and the afternoon was spent sharing spicy crackers, sweet tea and much Hive related conversation.

The Hive got carefully packed away into a huge shipping crate and travelled across Java from Joga to Jakarta in a truck. I arrived separately and was instantly struck by the never ending urban sprawl of Jakarta and intense muggy heat. The Hive was part of the UK/ID Festival at Monopoli Hotel in the trendy south end of town. We were informed that we had to load The Hive into the hotel late at night to avoid the crowds. A late night mission was on the cards as the crate had been dropped off across town… It had all the hall marks of a sleepless night. We travelled around town sitting in the back of the pick-up like bandits. It took a while, but everyone was helpful and it actually ended up being pretty fun.

The festival was well attended and over the course of three days I showed many people how The Hive worked. The instrument got a good response, and many people recommended all sorts of places across Indonesia to visit. I made lots of friends and hung out with the Waft collective who were also exhibiting at the festival. 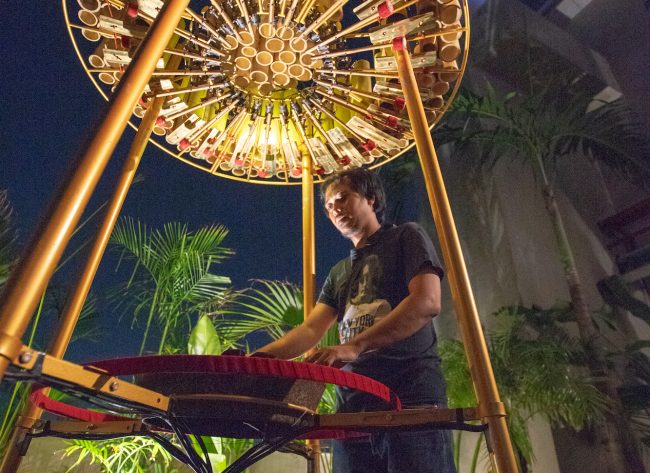 It was my last day and the hotel was strangely quiet after 3 days of festival. I went up to the roof and packed down The Hive in the baking heat. It seamed a shame putting all the bits back in cases after such an adventure. I had given Tony one of the beaters so he could get some made for the Indonesian Hive. I thought about which one of the many little road metal workshops I had seen, might end up making a new set of beaters…

We decided we would have to find a way to finish the Indonesian Hive in the future. We made a plan to either send over a brain/controller or send enough diagrams that someone could make one over in Indonesia. We liked the idea that two Hives could exist in different continents but could exchange compositions, The Hive could be controlled over the internet so we imagined linking the controller from one to the beaters of the other to form some sort of elaborate cross-continental door bell… 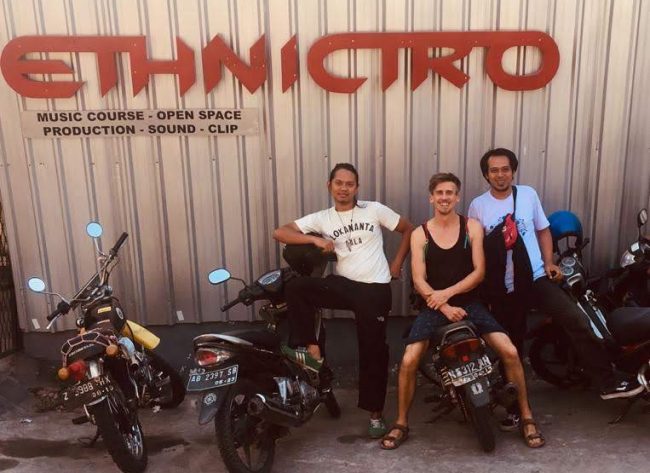 I would like to absorb the sights and sounds of the trip and observations of working practice into my future projects. Taking a break when things aren’t working, reserving time for friends and conversation even when deadlines are tight, practicing a make do and mend attitude and generally trying to keep chilled, radiant and happy. It was fortunate that there where at least 5 different festivals on over my short trip so I managed to see a good cross section of music, dance and cultural happenings. I took in music that bridged into cultural tradition and ceremony and ritual, I went on some musical journeys with bands using ancient mantras and unusual instruments and observed a connection between music and architecture surrounding Gamelan. It was great working on a project in an alien environment and breaking out of touristic habits by having a defined purpose. I look forward to future collaborations!

Laurie was a collaborator on The Hive since its conception for AND Festival 2017. He is one of the founder/directors of the Kazimier collective; a collective that creates interdisciplinary multimedia shows for a variety of contexts from intimate immersive theatre to mass outdoor spectacles, working with light, sound, and performance to explore new forms of ceremony and collective experiences.