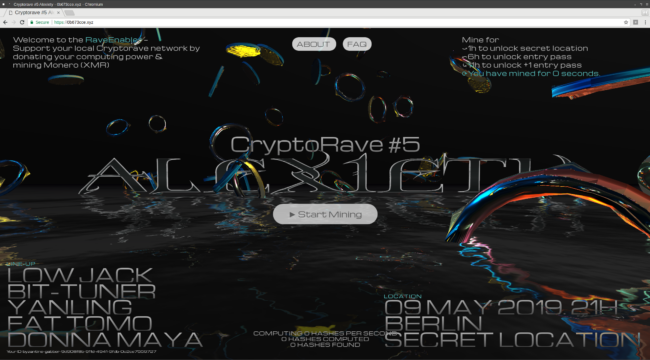 A utopian gesture to adopt and experiment with blockchain technology, the CryptoRave is a gateway into an experimental online community and autonomous dance scene subculture. Playfully organising sub-raves via the blockchain, CryptoRave uses mining as an entry point via friend2friend networks. Harvesting collective computing power to mine cryptocurrencies, the CryptoRave community generates value to fund the machine and enable an autonomous and multi-layered dance party featuring Live Action Role Play (LARPing) and Real Game Play (RGP) event.

To receive an entry pass, CryptoRrave attendees mine cryptocurrency through RaveEnabler, a website with an embedded Monero (XMR) miner, supported by a DAO (Decentralised Autonomous Organisation). The RaveEnabler website gives anyone easy access to the CryptoRave mining pool, without detailed technical knowledge. All proceeds are kept in a community Cryptowallet, while the miners are awarded entry tickets to the CryptoRave.

Through the RaveEnabler, the CryptoRave community not only experiments with the use of crypto mining as a sustainable method to fund CryptoRave events, but also uses a layer of Real Game Play (RGP) to provide unique roles to the participants. The roles allow the players to anonymise their identities by adopting a character from the crypto scene. The adopted identities create a fiction within which participants can collectively reflect on alternative futures for decentralized networks, anonymous hidden networks and how we can build trust and resilience into these.

CryptoRave – Rave Enabler has been commissioned by The New Networked Normal and will be showcased on the freeport platform, and at FREEPORT: Terminal MCR, a one week AND take over the University of Salford, MediaCityUK.

Book tickets to the accompanying talk Terminologies for CryptoRave – RaveEnabler  as part of the FREEPORT: Critical series on Fri 15 February 2018.