The Art of Bots / In Your Browser - Abandon Normal Devices

The Art of Bots / In Your Browser

The Art of Bots programme at Somerset House recently saw 15 artists develop physical manifestation of twitter bots, which were literary, sculptural and musical. It was a timely stroll for the compulsive consumers of these web-based computer programmes to subvert the tools of silicon valley and consider the potential of the artbot.

Now, the experience is accessible from your web-browser through key projects from artists Chris and Ali Rodley, Julien Deswaef and Matthew Plummer Fernandez, Sam Lavigne and Katie Rose Pipkin.

In this online programme expect numerous techniques and aesthetics merged and blended together to promote not only a wide window into this community, but to give you insight into creative potential of bots themselves. It is part video, part twitter stream and part a journey though tabs.

One binding link is the deviant and playful exploration of post-human authorship and the creative potential of accident and automation. As Chris Rodley says “In digital writing authorship is split between the primary creator, automated processes or bots, and increasingly other users on the Internet”. Through these projects you gain a glimpse into how bots can create meaning and content, where a community of users had previously said or created nothing. Shiv Integer is a bot that inhabits Thingiverse, a site for sharing 3D printable models. The bot downloads models and uses them to make random assemblages that get posted back on Thingiverse.

The bot complies with the open licensing granted by the model’s authors, only remixing files that are published with the freedom to be modified.

The bot has been running anonymously since February, receiving mixed reactions from the Thingiverse community: complaints, harassment and conspiracy theories appear in comment threads alongside fans that defend the bot and write it short stories. The bot recently surpassed two hundred creations. This new UK version of C-SPAN 5, titled Parliament Live, focussing on footage from the House of Commons. The bot downloads videos from the UK parliament at random, then transcribes that video and analyses which words were spoken most frequently. Using that analysis, the bot generates a new cut of the video containing only the top keywords.

Each video is completely auto-generated: Sam has no direct control of which keywords are selected or how the final edits come out. Encompassing an impossibly large corpus of political spectacle, talking points and general tedium, what follows is Live Parliament rendered in its most concentrated form. B-Movie Generator is a twitter bot that randomly generates campy horror film titles in the tradition of production houses such as Troma Entertainment. Its humour is derived from the association between classic b-movie naming conventions and unrelated, randomised terms, lovingly subverting and remixing clichés of the genre.

Mirror Lake is a procedural landscape generator. Landscapes are drawn stroke-by-stroke, in the same way that a person may draw a picture. Each component structure of the landscape places pixels according to their own rules; the trees grow, the lakes expand, the stars align. One may generate a new landscape on command, or simply wait for the program to begin again. You can also print a tiny landscape to take away with you. Magic Realism Bot is inspired by the writing of Jorge Luis Borges, Umberto Eco, Gabriel García Márquez and of the children’s stories by Lewis Carroll, Philip Pullman and Richard Hughes. This literary bot, creates generative story synopses (in 140 characters), which it tweets every two hours, each day. The story content covers a rich and colourful terrain – from glass cathedrals, swimming pools filled with clocks, a tsarina who falls in love with time.

This iteration of the twitter bot Magic Realism Bot is different from the twitter bot.  Most importantly, you’ll see the miniature stories being constructed piece by piece—the code will propose and discard potential vocabulary choices before settling on the final outcome. 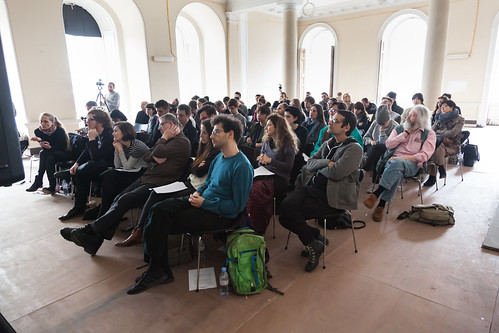 Part of and with support of: