Teenagers are famously complex and emotionally unstable. Their limbic systems are on overdrive, their hormones are running amok, they’re prone to staying up late, sleeping well past noon and taking crazy risks. It’s no accident. Scientists believe that their brains are particularly alive, active and sensitive. Their behaviour is an evolutionary feature: it’s how teens define and distinguish themselves; it’s how they get shit done. Teen brains are fast, risk-taking blobs that make creative and sometimes bizarre leaps and associations, giving them an adaptive edge. This is a scientific fact.

During the Summer 2012 AND commissioned Mammalian Diving Reflex to work with a group of teenagers form Greater Manchester, to form a panel of teen advisors. In the run up to the festival the team of teens spent a couple of weeks together, becoming accustomed to deliberating over problems and dishing out advice. They then designed a day of events which would involve solving people’s problems in front of a live studio audience. Prior to the festival, the general public were invited to submit their problems to the panel of teens via the festival website. The panel spent time working out solutions and fed back to the public online. 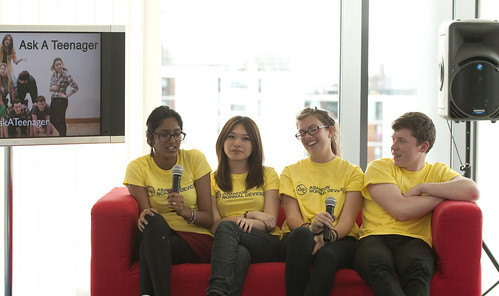 There was also a series of live panels during AND Festival 2012 and a discussion with Darren O’ Donnell, founder and director of Mammalian Diving Reflex and Neil Winterburn who facilitated the project workshops.