Dopplereffekt is one of the strangest and most mysterious units on the electronic music scene today. Only a handful of interviews with the group existed and live appearances were likewise a rare occurrence. One thing we do know about the group is its apparent love of experimental physics, with song titles such as Calabi-Yau Manifold, Linear Accelerator and Myon-Neutrino appearing on recent records. Continuing this interest in the farther reaches of science, Neutrino was a new project that used astrophysics lectures as the basis for their audio visual performance.

Neutrino was supported by Abandon Normal Devices and the Max Planck institute for Astrophysics.

Inimitable electro duo Dopplereffekt are one of the most mysterious, thrilling and consistently challenging entities in electronic music. Originated by Gerald Donald, one-half of Drexciya and responsible for era-defining releases under a variety of enigmatic aliases, the current iteration of the group includes Donald and fellow explorer To-Nhan. Together, the pair’s razor-sharp production and a peerless capacity for transportive soundscapes are as likely to reference concepts embedded in physics and biology as they are capable of moving crowded dancefloors. Dopplereffekt inhabit a unique contemporary sonic world, with a restless creativity and intense commitment to carving out their own musical space. 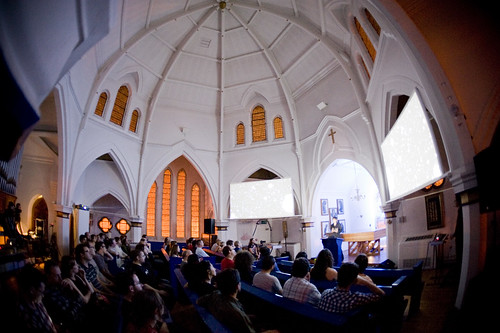