AND Festival 2011 abandoned the gallery to spill out into cafes, shops, clubs and markets in a quest to test the trust and gullibility of the public, whether they are consenting or not! Audiences were told to expect phoney Beatles, celebrity cults, gurus, gimmicks, satanic messages and scryers in places where mysticism meets money.

Opening Night: Mercy Presents Spectres of the Spectacle
Thu 29 Sept
Produced in collaboration with art agency Mercy as part of its Overlap programme, Spectres of the Spectacle rounds off AND’s opening night celebrations with an A-list of experimental artists, performers and musicians. Expect a new auto-destructive work from musical pioneer Forest Swords, a one-off performance from Anat Ben David (Chicks On Speed), arthouse boogie from Maria Minerva, and a unique mix of avant garde performance and new writing from Victoria Gray, Nathan Walker and Emily Critchley. A must-see for music fanatics, fantasists and self-styled outrénauts. 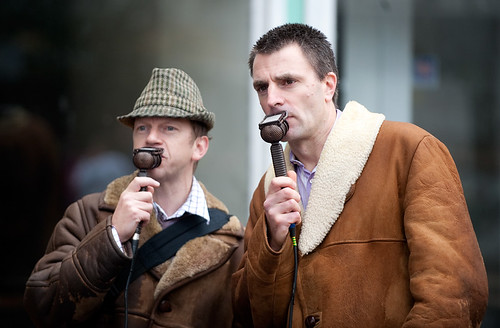 Boo Chapple
Sat 4 Sept
Referring herself as “relentless autodidact synthesist and jack of all trades”, Boo Chapple is an Australian artist and researcher who conceptually driven practice has been enacted across a diverse range of media. During the festival, Boo set her unique interventions and conversations with the public on market stall and adult shops.

Citizen X
Bored of your identity? Fancy renting a new one? Speak to artist Heath Bunting who will provide you with the relevant legal documentation.

Backwards Disco
Sat 24 Sept
“Oh I never will be saved, because I live with Satan” is just one of the phrases said to be revealed by playing Led Zepplin’s 1971 hit Stairway to Heaven backwards. Fascinated by the modern myth of hidden messages and devil worship, David Wojtowycz helped Preston Market punters discover what other strange and ungodly messages may be lurking in their favourite old vinyl. 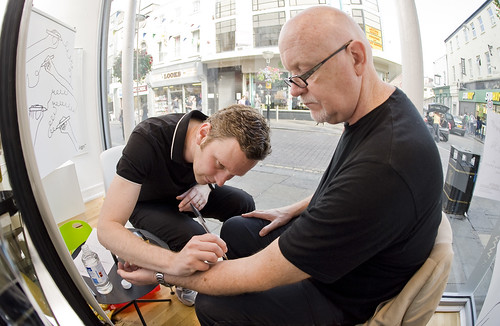 Tattoo Event: David Shrigley
Sat 1 Oct
Known us much for his witty commentaries on the human condition as he is for being the illustrator of ‘those’ birthday cards, at AND Festival, the talented Mr Shrigley turned his hand to the tattooist’s art. AND Festival attendees were invited to become a living canvas for one of Britain’s finest contemporary artists.

Butterflies, 2011
Thu 29 Sept – Sun 02 Oct
The books at Liverpool’s not-for-profit community bookshop News from Nowhere came alive in a new installation by Canadian artist Robyn Moody. The books in question all fit the criteria of ideas that, like some species of butterfly in the UK, have been threatened with extinction. Among them was a book that was met with hostility when it was first released and is now under attack by proponents of intelligent design: On the Origins of Species by Charles Darwen.

The Idroids
Thu 29 Sept – Sun 2 Oct
Who are the idriods? What do they want? And how cam they look so friendly, yet act so opinionated and myopic? Be prepared for more questions than answers as the Idriods arrive in Ropewalks.

Data Mining Divination
Fri 30 Sept – Sun 2 Oct
The idea that patterns can help us make sense of life is never truer than today, when vast computational power can help us find meaning in data sets previously impossible to grasp. Data Mining Divination explores the faith we put in patterns in light of these advances, combining computer programming with the ancient form of divination; the reading of tea leaves.

P2P Gift Credit Card
Do you believe in money? P2P proposes an act of economic idolatry: the establishment of an alternative system of money that not only shares wealth equally amoung all members of society but is directly regulated by ordinary people. All you have to do is pick up a P2P credit card at http://www.p2pgiftcredit.com/ to start getting involved.

Phone Story
Digital agitators Molleindustria have created a game for smartphones that brings to light a few troubling facts about our beloved gadgets. Often the hi-tech sector is seen as non-material witrh most of its value concentrated on intelectual property, design, software development and marketing. This project revealed the reality; a very material, sometimes troubling chain that stretches across the globe. http://phonestory.org/

Workshop: Data as Documentary
Databases carry the same seeds of creativity that early documentary makers saw in film. Both can empower people by helping them to master information; equally, both can be misread for the purposes of propaganda and deception.

The workshop explored how art and its methods can critically reflect on the power of databases, taking as its first case study the record of birth registrations held by the Office of National Statistics.

The workshop was presented by Graham Harwood, one half of digital media specialists YoHa. Produced in collaboration with Primary Care Trust Livepool.