Originally commissioned to tour the North West of England in 2012, Mobile Republic headed to Northern Ireland in the Autumn of 2013  for CultureTECH, a digital technology, media, music and arts festival that formed a major part of Derry-Londonderry’s yearlong City of Culture celebrations.

The classic touring caravan is a symbol of the traditional British summer holiday, but these caravans are not what they seem. Beneath their innocent exteriors the five caravans have been radically remodelled and re-imagined by artists, architects and activists.

Drawn together in a wagon circle gathered around a central ‘big-top’ designed by Bureau A, Mobile Republic featured an artist’s studio, performance space and an indoor/outdoor cinema screening London Fieldworks’ End of the Road and other short films.

Allowing you to create and taste-test your own unique spice combination, The Centre for Genomic Gastronomy’s ‘Planetary Sculpture Spice Mix Super Computer’ also featured, while Julian Oliver’s Border Bumping caravan mapped telecoms infrastructure to change the way Derry men and women understood where they are.

All of this activity was broadcast online from a media hub caravan created by artists and technologists Hellicar and Lewis. 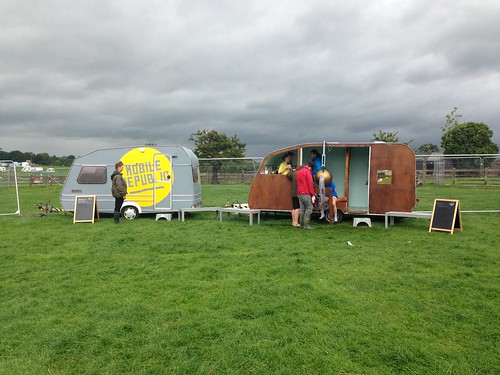 Mobile Republic is commissioned by AND and funded by Arts Council England, London 2012 Festival and Legacy Trust UK.