Preston is the UFO capital of the UK, alleging more sightings of alien spacecraft than any other city in the country.

Inspired by this, Shezad Dawood has worked with novelist and scriptwriter Kirk Lake to create Piercing Brightness, a science fiction film set and shot entirely in the city.

An eerily beautiful first time feature from a figure already known for his work as a visual artist, the film uses the idea of visitors from another planet to question our earthly preoccupation with religion, class and race.

The preview of Piercing Brightness at AND Festival 2011 was accompanied by a live soundtrack by Kawabata Makoto of Acid Mothers Temple (Japan) and followed by a discussion with Dawood in conversation with scholar Mark Barlett.

The film was commissioned by In Certain Places, a public art programme including an exhibition by the same name at Harris Museum & Arts Gallery, run jointly by the Harris Museum and Art Gallery and the University of Central Lancashire with additional support from Abandon Normal Devices. 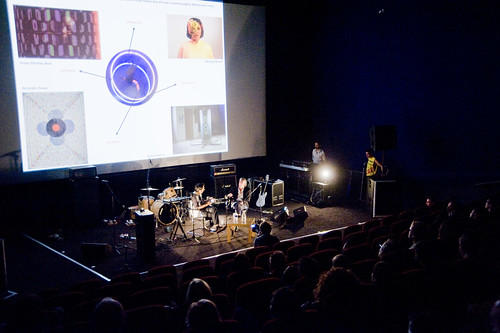