AND was proud to present an exhibition and personal appearance by the renowned American artist Carolee Schneemann, who took over Tate Liverpool’s Wolfson Gallery for the duration of our 2009 festival.

Revered for her pioneering and provocative work in performance and film, Schneemann deploys her own body as both subject matter and a source of knowledge. Early works such as Meat Joy, in which semi-naked performers grappled with one another within an orgiastic mélange of fleshy, messy materials, shifted the visceral materiality of the body into the expressive realm of the painter’s canvas.

In the context of the women’s movement in the 1970s, Schneemann’s practice introduced the body of the artist as the source of creative and imaginative energy as well as the site and subject of the work. 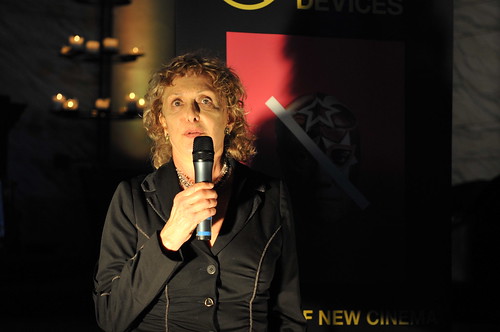 Tate Liverpool and AND presented a very special personal appearance by the renowned American artist Carolee Schneemann on Thurs 24 September 2009, who performed Mysteries of the Iconographies live in the gallery. In this intimate visual lecture, Schneemann travelled backwards and forwards in time, beginning with obsessive childhood drawings of a staircase.

The performance explored diverse imaginings including the mysteries of a notched stick, paper folds, indentations and the slice of a line in space through unexpected structural motives, up to and including Schneemann’s recent photographic grids and objects.

The performance lecture was followed by a Q&A with the artist. The event was also streamed live into the gallery foyer.