The spectacular SEFT-1 is a road and rail vehicle created by Mexican artists – and brothers – Iván Puig and Andrés Padilla Domene, known together as Los Ferronautas.

SEFT is an acronym for the Spanish Sonda de Exploración Ferroviaria Tripulada (Manned Railway Exploration Probe). Designed to hijack railway tracks and traverse natural landscapes, the vehicle functions as a research device searching for otherworldly pasts and infrastructural histories. Its early adventures include journeys along the abandoned railways of Mexico and Ecuador.

The vehicle’s premiere UK expedition began in September 2013 with a month-long residency. Its base was a canal side atelier in Blackburn where Los Ferronautas experimented with how to make the vehicle buoyant for future expeditions on canals and waterways. From Blackburn they made a series of forays across the Northwest of England, presenting a programme of talks, film screenings and pop-up events as they wound their way to AND in Liverpool.

On its expeditions, SEFT-1 surveyed the landscape and infrastructure along selected routes, documenting its encounters with interviews, photography, video, audio and text. This activity was transmitted online, making it possible to monitor the status of the probe, trace its location and view details of what it discovered en route.

SEFT-1 was presented in partnership with The Arts Catalyst.

Andrés Padilla Domene was born in 1986 in Guadalajara, Mexico, and was educated there in Media Arts.

In 2008 he was a Fellow of the State Fund for Culture and Arts of Jalisco with the project Ferroproyección.

Iván Puig Domene (www.ivanpuig.net) was born in 1977 in Zapopan, Jalisco, Mexico. He spent his first years between the streets of Guadalajara, the tropical jungle of Comala and the car junks of Tijuana, circumstances that where important for his later art production. He did studies in electronics in Guadalajara and Fine Arts in Guanajuato.

The techniques that Puig uses are not what determines his work since he jumps from one to another. The line that connects it is the critical perspective and the humour present in his observations of the social environment. Indignation has been an important trigger for the subjects he approaches, and one of his concerns is the time consuming collateral activity related to the professionalisation of art, such as writing biographies in third person.

Ivan has has worked on SEFT-1 with his brother since 2007. His award winning work has been shown in Mexico and abroad. 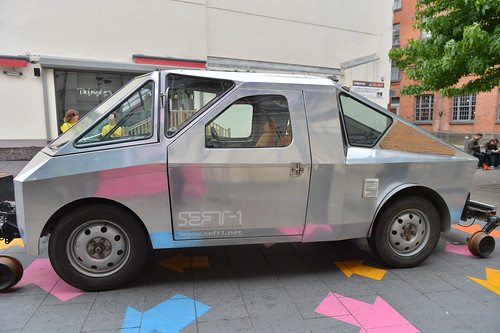 About The Arts Catalyst:

The Arts Catalyst commissions art that experimentally and critically engages with science. They produce provocative, playful, risk-taking projects to spark dynamic conversations about our changing world. The Arts Catalyst has co-produced SEFT-1’s 2013 AND residency and will be hosting a major exhibition of Los Ferronautas’ project, including video, documentation and the SEFT-1 vehicle in London in summer 2014.