Strange Attractors – The Anatomy of Dr Tulp was a study of embodied discourse; how we use our bodies to move and to communicate in a material world, and how our bodies mediate between the internal and external worlds, at a microscopic and global level.

Modern biology has shown that matter is far from inert; it is ‘self-organising’. Theories such as Epigenetics, the idea is that environmental factors can cause an organism’s genes to behave (or “express themselves”) differently, even though the genes themselves don’t change, point to the complex self-organising qualities of matter.

Strange Attractors used light projected onto the ground, to examine the relationship between the motion of real, inanimate, and virtual bodies. When people enter the space they become active participants, as magnetic bodies themselves, bringing life and animation, disturbing and redistributing the ﬂow of energy through the system.

The piece encouraged playful interactions between individual participants and each other. Whilst the work was modelled to encourage particular forms of interaction at specific times, the nature of these interactions was of course unpredictable…

The presence of a KMA installation creates a distinct aesthetic impact on the environment in which the work is experienced, drawing audiences to it – quite often by chance – as people go about their daily lives. By arresting time and space within the public arena and blurring the distinction between performer and audience, KMA’s work is opening up new environments in which art and audiences meet, equally on each other’s terms.

Strange Attractors also toured to Blackburn during AND Festival 2010 (Spring). 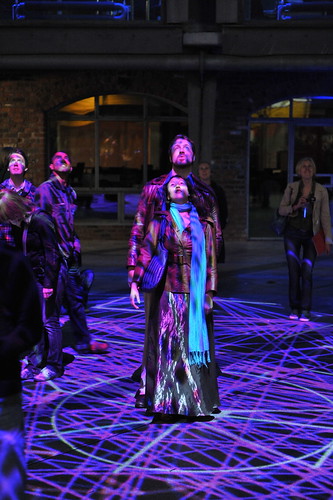