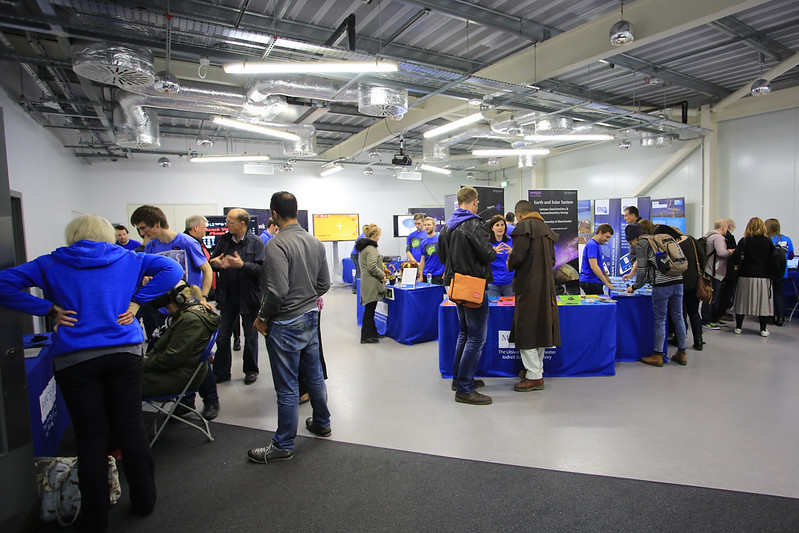 In 2014, our Watch the Skies! weekend of interstellar cinema took audiences on a sonic journey as we tuned into signals from other planets, satellites and life forces featuring the classic science fiction films 2001: A Space Odyssey and Alien, accompanied by newly commissioned film projected onto the surface of the Lovell Telescope itself and a special screening of Magnetic Rose featuring Oneohtrix Point Never.

Prior to the main events our Watch the Skies! Science Fair took centre stage, where staff and students from across The University of Manchester showcased carnivorous plants, moon rocks (from the actual moon) and sounds from space courtesy of the Jodrell Bank archive.

Then the spectacle commenced each evening with Soup Collective’s audio-visual commission for the Lovell Telescope, Jodrell Bank Calling, marking the launch of the first artificial Earth satellite into space with footage of the Soviet Union’s Sputnik 1, originally detected and documented by Jodrell Bank on October the 4th 1957.

On the Friday evening, we finished with Kubrick’s spectacularly transcendent epic, 2001: A Space Odyssey, which has been the touchstone for all science-fiction cinema since it first hit the screens, in 1968.

On the Saturday evening, we saw the premiere of Oneohtrix Point Never‘s new original soundtrack for Magnetic Rose – a rarely seen short film from Koji Morimoto (the creator of Akira). To capture a sense of the early apprehensions and uncertainties surrounding scientific ventures beyond Earth, we concluded by screening Ridley Scott’s stomach-churning Alien as our feature film.

The weekend was not only a celebration of classic science fiction but also the October 4th anniversary of the launch of Sputnik I at the dawn of the space age and the completion of the Lovell Telescope, both 57 years previously.

More about the features

Friday 03 October 2014
2001: A Space Odyssey, Dir Stanley Kubrick  (GB/US/ 150mins) (U)
This landmark sci-fi feature is widely regarded as one of the greatest films ever made. Critic Roger Ebert described Kubrick’s masterpiece as “a stand-alone monument, a great visionary leap, unsurpassed in its vision of man and the universe”.

The pinnacle of its genre, 2001: A Space Odyssey sets our solar system as the stage for a metaphysical reflection on humanity. Featuring groundbreaking visual effects, transcendent symphonies and haunting silences, we are ultimately abandoned to speculate as we wish. 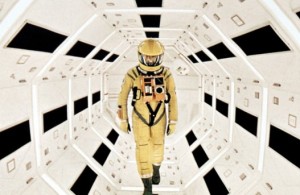 Ridley Scott’s franchise spawning Alien is now synonymous with the “chestburster scene” and the set design from Swiss surrealist artist HR Geiger, whose aliens have become icons of the monstrous and the unknown.

These stunning visuals are only the background to Sigourney Weaver’s central performance as the resolute Lieutenant Ellen Riley, which went on to warp gender roles, in film and is now widely acknowledged to be one of the greatest film heroines of all time.

Part of the “new flesh wave” of horror films which looked at the merging of bodies, machines and desires (David Cronenberg can also be counted as a contributor); the Alien story unfolds when a strange bioform joins the Nostromo ship after it makes contact with an unknown planet.

Otomo garnered worldwide attention in 1988 for his cyberpunk classic Akira. In this animated triptych, all written by Otomo, he once again gazes darkly into the future.

The first segment, called “Magnetic Rose” and directed by Koji Morimoto, is set in the year 2092 and centres on a quartet of futuristic losers on an orbiting garbage ship, collecting junked satellites. While trolling about the heavens, they encounter a massive rose-shaped structure, and things begin to fall apart as they are drawn into a magnificent world created by one woman’s memories. The screening at Jodrell Bank featured a newly commissioned live score by Oneohtrix Point Never.

Watch the Skies! was a flagship event in the BFI Blockbuster project SCI-FI: DAYS OF FEAR AND WONDER, presented together with O2.

Watch the Skies! was curated by Abandon Normal Devices and produced in partnership with Jodrell Bank and Live from Jodrell Bank Transmissions and funded with the support of the BFI, awarding funds from The National Lottery.