Rethink, reconstruct, rewire the devices you use, the games you play, the identities you inherit and the bodies you employ. Audiences were invited to join digital agitators in making new routes into devices and environments. 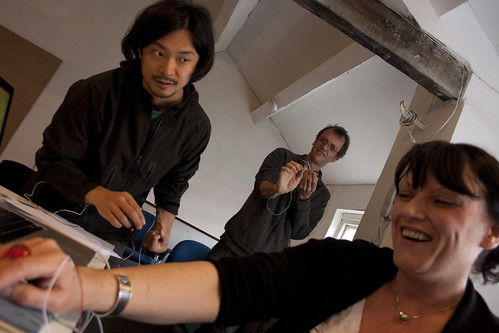 Body Hacking Workshop
Daito Manabe
Muscle sensors and electrical stimulation enabled workshop participants to use their own body as an INPUT / OUTPUT device, controlling or controlled by a computer. The workshop questioned the social and ethical problems arising from creating systems that can harvest sensory data from our bodies.

Interface Amnesty – The public wants what the public gets!
Sound Network
How do the devices and tools we use shape who we are? Why is the flat screen our interface of choice? Are the ways we use devices complicit in constructing our ideas of normality and how we then want to reject them? Artists, hobbyists, technologists and makers were invited to show and tell self-made, developed and hacked devices for playing with the world.

One Button Challenge
AND dared workshop participants to conceive, design and build a device with a single button input. In a world where our interaction with technology is dominated by multi-functional hand held devices, motion-detection controllers and touch screens what becomes of the lowly, single button?

Bunting and Kennard’s 2 day workshop
Heath Bunting and James Kennard
Participants joined Heath Bunting and James Kennard in preparation for an imagined dystopic future, tracking supermarket store club cards in the hope of securing a secret electronic identity. Participants fought back the mid and rocks in a game of escape and evasion, despair and transformation. We constructed and destroyed ourselves in an afternoon of fight and flight from predators in the air and on the ground.

Spelunk the forest!
Rob Ray
Rob returned to AND to take up a residence in Livia, one of Europe’s largest urban forests just 2.5 miles from Manchester City Centre. Participants joined Rob with members of the Forestry Commission to explore the technical, fiscal and creative implications of alternative energy technologies on sound, video and interactive artworks.