Dive into a gentle conversation between Scalarama Merseyside‘s Michael Pierce and Monika Rodriguez, exploring their first memories of water for Headwaters: a programme of archival film and conversation curated for AND Festival 2021.

Catch up with the first journal post: The Prologue.

Mon: We are Scalarama Merseyside and welcome to the first chapter of our journal series for Headwaters. Today we are going to talk about our first connections with water and encounters with rivers and lakes.

Mic: Cinema was Monika’s and my first meeting point, so we are tracing our personal stories back, using water as a source for our memories. This project for AND Festival has emerged from our work with film archives and we have been thinking about how water is presented. Film cannot contain the tangibility of water, but we are interested in the feelings that water evokes.

Mon: We are also interested in the smells and the sounds of water – how does film and their archives capture that? We have to rely on each other’s stories and memories, trusting that they will replicate what we want to share. Let’s start! Are you ready? Michael, what are your first memories of water?

Mic: When I think back to my early memories, they aren’t of specific events but just snapshots of swimming pools and having baths. I feel like I went swimming quite a lot as a kid.

Mon: Do you have any memories of rivers or lakes?

Mic: Well, my home town is Tonbridge in Kent which has the River Medway running through it, and as it’s on a flood plain – the flooding of the town centre is something people locally talk about. There was a flood barrier built and that’s in a country park with a lake we used to run round. My happiest memories, though, are of the stream that was at the back of my grandparents’ house in East Sussex – it had a little bridge over it and we would play Pooh sticks. It brings back really strong memories of my grandma and especially the vines that grew in her sunroom. And for you Monika? 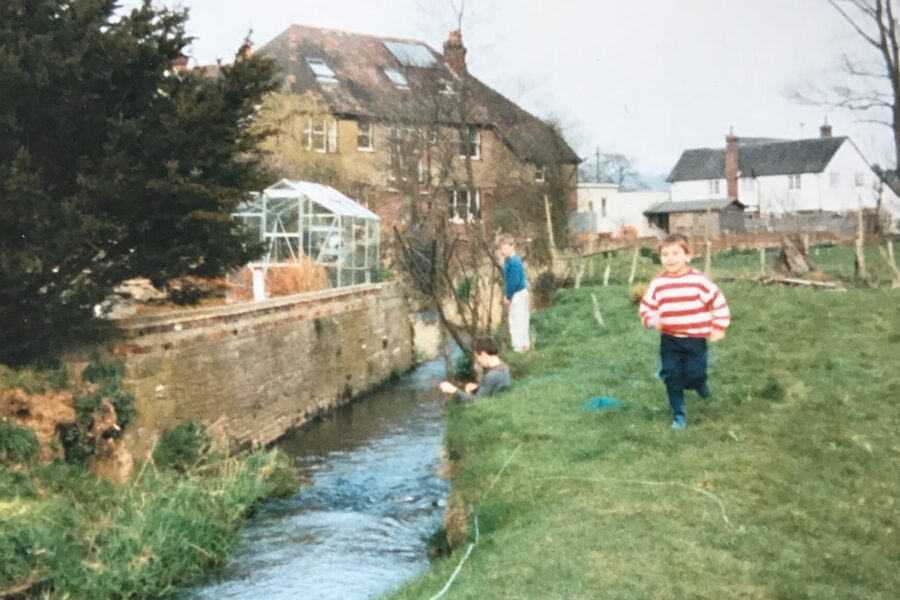 A photograph of a photograph of Michael as a child, in a white and red jumper running beside a stream in a field with two boys behind him and some houses in the distance.

Mon: My first memories with water are from when I was a kid and I used to go to see my grandparents in Barcelona and spend 3 months there. We used to go to the beach, and l have vivid memories of those years – long summers by the sea, the smell of salty water and the smell of the salt on the skin – it felt healthy. I remember going to my parents house in the village, where there was a river called Rio Moros in which we used to swim. So I’ve always been close to water and it’s really linked to summer. My memories are mostly of happiness.

Mic: And any lakes?

Mon: Yes, there was a laguna at the back of my parents’ flat in the middle of no man’s land. Close to this laguna is a mining deposit of a mineral that they use to produce cat litter, the last one remaining in the world. Somehow, I can still smell the mines. The laguna was called Ambroz. I remember it particularly well, because as kids we would go to spend long afternoons after school exploring the place. Not far from the lake, used to be an outdoor cinema which would project old movies during the summer nights. The images of films projected on a white sheet are crystal clear in my mind- I guess because this is a really strong part of my childhood.

And now, how do you feel about living close to a river in Merseyside? 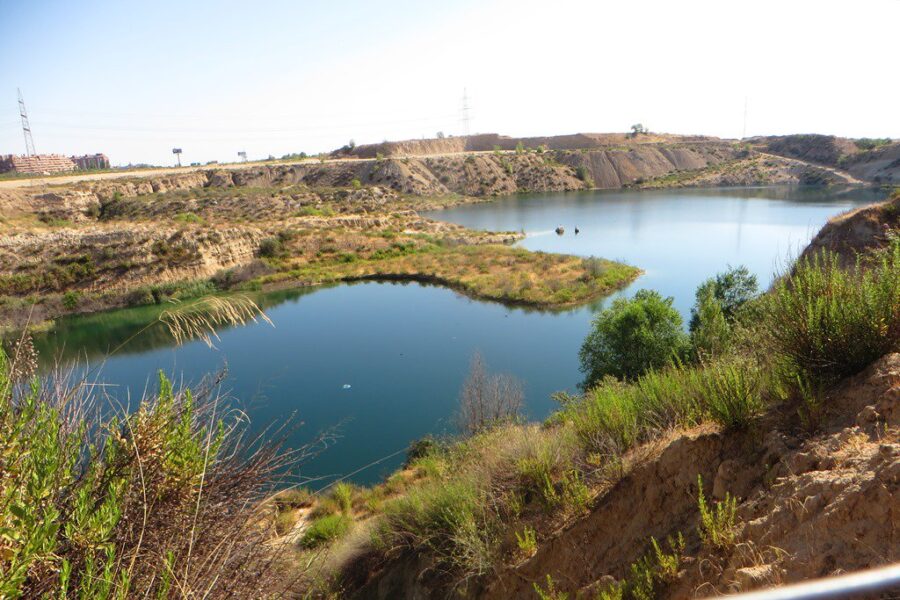 A photograph of Ambroz lake, with two ducks swimming. At the back in the far distance, there is a set of flats.

Mic: I love the sunsets over the Mersey, but I didn’t consider the connection with the river when I moved here. I think that’s because I moved from London where I never felt any connection to the Thames – it felt like the river created a big divide in the city. I say that because I now feel really connected to the Mersey and through this project have learnt the history of both Liverpool and Wirral through how the river has been used. One thing I do remember from London was the stories of lost rivers like the Fleet and Effra, and so I feel a really strong emotion when learning that rivers were used as sewers or have been covered up. For instance, I was told Borough Road in Birkenhead used to be a river. And how about you, do you feel connected to the Mersey?

Mon: I’m glad I moved to Liverpool, a city with strong links to water and where the river plays such an essential part. However, in my opinion, it’s not easy to access the river or walk along the bank. In order to bring the river closer and create access to the docks, I believe the Council had to sacrifice Chavasse Park. It was an emblematic green space in the city centre. Nowadays to access the river you have to go through concrete and shops, and Chavasse Park has lost its original spark. The first time I went was back in 1993 at the International Beatles Festival. The festival happened throughout the city with lots of cover bands, and Chavasse Park felt like a beautiful communal space, with everyone enjoying Blondie songs under the sun. 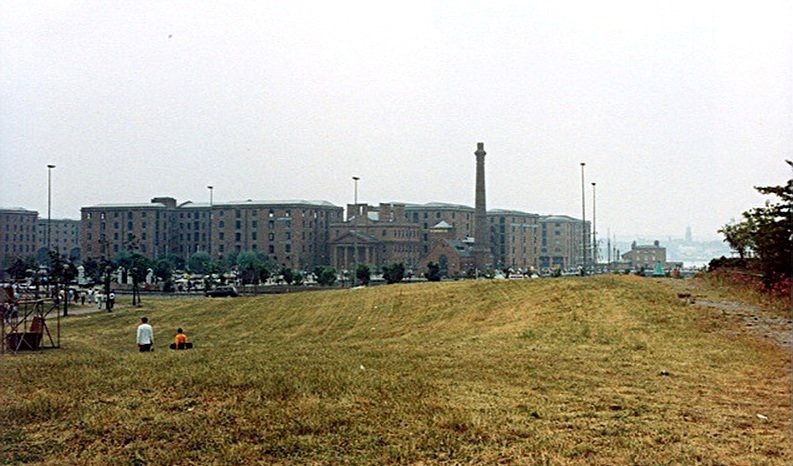 Chavasse park before Liverpool One was built.

We use stories and photos like this as part of our view on the archive, it’s more than just footage. This is something we will be exploring in our first event where we are looking at cinemas and communal spaces.

The first event in the Headwaters programme is Show and Flow, 16 June 7 – 8.30pm. This event is free, but capacity is limited, so please book a ticket to ensure your place.

What can we learn from cinema preservation in the quest to protect water?