Rough Fish  (TRES Art Collective) invited participants to explore the canals through a playful mapping and storytelling game. To unearth trashy treasures, create new legends from the towpath and contribute to a new social cartography of the canals.

Over two weeks in April 2015 over 100 Fishers and Spotters  participated in Rough Fish, a pervasive game taking place along the canals in Manchester and Rochdale. Players observed, spotted and fished rubbish, scoring points using the Rough Fish mobile game app. Competing against each other for the coveted title of ‘Rough Fish Champion’ and the chance to have a Manchester canal lock named after them (temporarily!).

The game was been devised by international artists TRES, a Mexican collective whose research looks at the political and material implications of waste as residue of contemporary civilization. Rough Fish was the artists’ first work to be made in the UK and culminating in a collective conceptual mapping event, where Fishers will trace their trash, mapping relations through a social, economic, political or environmental lens.

The Game
Participants chose between ‘Fisher’ and ‘Spotter’ game roles. ‘Fishers’ were be armed with a bespoke fishing kit and floating gps beacons. Tasked with locating and cataloguing specific items of refuse found on the waterways through the Rough Fish mobile game app. The records began to create a narrative about what we discard and how it can be used to tell stories and uncover social behaviour. ‘Fishers’ earned points for the pieces of rubbish they collect, and for writing creative stories about the collected items and the places around the canal. At the end of the game, the player with the greatest number of points had honour of bestowing their name to a canal lock in Manchester. The game took place over a 2-3km stretch’s of the Rochdale Canal in Manchester’s City Centre and Rochdale. Over the two-day game parts of the canal accumulated beacons making visible the quantity and in-equality of rubbish that inhabits the canal – telling stories about our canals and the people and places around them. The beacons contained GPS trackers that mapped their journey through the waterways via the mobile game app and the wastes journey through the waterways.

‘Spotters’ played the role of locating the beacons or floating litter along the canal and directing the Fishers to its location – in turn earning more points for their litter-ature champion.

Fishers will be provided with a kit that consists of protective clothing (jump suit, high visibility vest, gloves and face mask), fishing net or litter picker, a bag for recollecting trash (including ziplock bags, disinfectant), 50 beacons and a mobile device with the mobile game app. They will be also given training and information on the game and health and safety before they begin the game.

Final Event
The final event took place at Federation House in Saturday 25 April and was a culmination of all the game activity, rubbish and data collected. There participants and had an opportunity to meet the artist, discuss the project and contribute to a collective cartography.

The event acted as an artists open studio, bringing together all the the rubbish fished during the games. By placing it in a wider context they invited audiences to draw relations between types of rubbish and word associations used in the game. Alongside classifying and mapping process of the geographical location and movement of each item fished.

This event enable the rubbish fished from the canals to be expanded and contextualised through TRES’ specific archival lens, creating and sharing an alternative portrait of Manchester that can allow us to draw economical, consumption, and social narratives.

Background
In October 2014 Abandon Normal Devices and the Canal and River Trust invited Mexican artist collective TRES to develop research and ideas for a new participatory touring project for the canals. Setting TRES loose upon the waterways and canals, they were free to research waste as an archaeological subject. The artists spent one month immersed in and on the Manchester and Pennine Waterways, investigating the spaces in and around the canals, speaking to people who work with, live on use the canals. Tasked with considering how what we discard can be used to tell stories, Rough Fish is the outcome of their research.

The name Rough Fish comes for a slang term used by fishermen describing the less desirable fish types, usually larger fish or species that are rarely encountered, which inspired the artists as they viewed the diverse range of refuse floating in the Manchester and Pennine Canals. 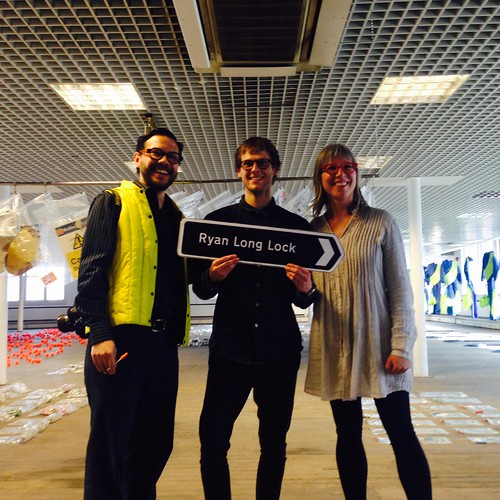 The project formed part of the Year of Mexico in the UK, supported by the Mexican Embassy and British Council.