“I want to update the conventional guided tour into something magical that weaves together science fiction, environmental themes and local architecture into a future fairytale – as seen from the River Mersey Ferry” – Anita Fontaine

The work was experienced by passengers via eight custom-built, tablet-based viewfinders on the decks of the Mersey Ferry. An abstract, physical, pop-up performance ritual during each cruise (Friday – Sunday), featured costumed inhabitants of the River, from Anita’s Fontaine’s future fairytale.

The Blue Violet River playfully envisioned a peaceful future vision of evolved humanity, freed from an unsustainable past and tuned into a new core consciousness of planetary sound frequencies. From the river’s intercontinental trade to the regular blooms of moon jellyfish drawn in by tidal currents, our post-industrial perspective of the River Mersey playfully warped in this future-forward techno fantasy. Read about the process of developing The Blue Violet River in Creative Review. 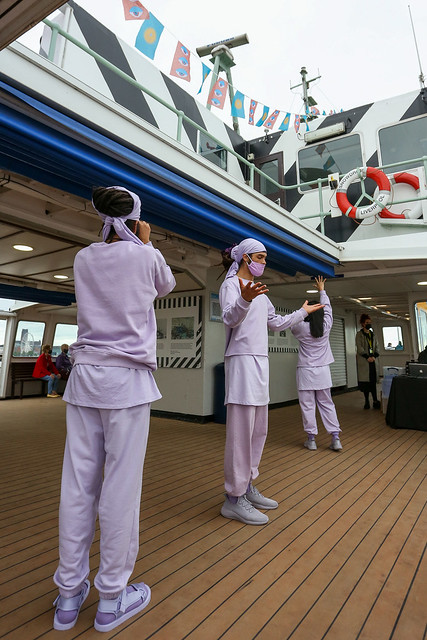