The Invisible City / The Cinema of Surveillance - Abandon Normal Devices

The Invisible City / The Cinema of Surveillance

In New York an injured photographer watches his neighbours via binoculars from his apartment window.

In Glasgow a CCTV operator watches over a small part of the world, protecting the people living under her gaze.

In San Francisco a paranoid, secretive surveillance expert has a crisis of conscience….

In collaboration with Heart of Glass, AND presented The Invisible City: The Cinema of Surveillance, an outdoor cinema event inviting audiences to speculate on the act of seeing – and being seen. The event took place on the site of the former Pilkington’s Glass HQ the programme explored sonic and cinematic espionage and featured classic surveillance films, artists moving image and tours blurring the famous, forgotten and private spaces of the building.

Using the setting of the historical home of glass, The Invisible City programme explored contemporary responses to technology and transparency. Here, you will witness the intimate, sinister and altogether unsettling dissection of characters by viewing the cinema through the windows of offices, cars and binoculars.

The main event on Saturday 12 November featured the world premiere of Where the City Can’t See, a new short film by artist-architect Liam Young, followed by the granddaddy of surveillance films – Alfred Hitchcock’s Rear Window.

James Stewart and Grace Kelly star in Alfred Hitchcock’s classic thriller, which explores the role of the voyeur. After breaking his leg during a shoot, photo-journalist L.B. ‘Jeff’ Jeffries (Stewart) is forced to spend a humid summer recuperating in his Greenwich Village apartment. Wheelchair-bound he spies on his neighbours from his apartment window and becomes convinced one of them has committed murder. Suspenseful, witty and at times funny, this is a film is as much about the audiences complicity as it is the protagonists. Commissioned by AND, directed by Liam Young and written by sci-fi author Tim Maughan, Where the City Can’t See is set in a not-too-distant future where Google maps, urban management systems and CCTV surveillance are not only mapping our cities, but ruling them. More info A single-shot, choreographed portrait of the Foley process, revealing multiple layers of fabrication and imposition. While portraying sound artists at work, typically invisible support mechanisms of filmmaking are exposed, as are, by extension and quotation, governmental violations of individual privacy.

The scene being foleyed is from The Conversation where Gene Hackman’s character Harry Caul tears apart his room – the look of Caul’s apartment mirrors the visual chaos of the Foley stage. This mirroring is also evident in the dual portraits of sonic espionage expert Caul and Foley artist Gregg Barbanell, for whom professionalism is marked by an invisibility of craft. 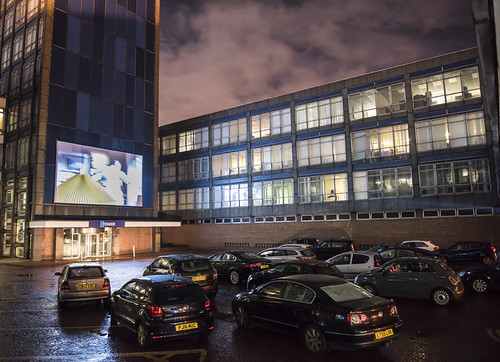 During the day there will be a number of unique tours of the former Pilkington Glass HQ, led by artist Michelle Browne. Focussing on the theme of transparency, they will look at the manufacturing of glass as a way to explore urban transformation, memory and labour.

Michelle Browne is an artist and curator based in Dublin, Ireland. She studied Sculpture at the National College of Art and Design, Dublin and is currently completing a Masters in Fine Art at the Dutch Art Institute in Arnhem, Holland. Much of her work is performance based and collaborative and she has performed and exhibited both nationally and internationally. Find out more at michellebrowne.net

The Invisible City is curated and produced by Heart of Glass and Abandon Normal Devices, in partnership with Alexandra Park (St Helens) Management Limited. This project is supported by Arts Council England and Film Hub North West Central, proud to be a member of the BFI Film Audience Network.