Film Data: For Our Viewing Pleasure shone a light on the unexplored territory of how film data can be used to inform, open and develop our love of cinema. From visualising audience taste to highlighting piracy hotspots, to provocations on spectator needs, hackers were challenged to develop a creative way of illustrating the dataset through making the data interactive or productive.

This hack weekend was a chance to meet fellow cinephiles, data geeks, pirates, designers, dreamers as they came together to use cinemetrics to integrate and envision this emerging landscape.

AND Hack #1: Film Data from Abandon Normal Devices on Vimeo.

The weekend was kickstarted with a series of Lightning Talks delivered by professionals, provocateurs and pioneers from across the film industry – each demonstrating their own use and abuse of data from a range of perspectives.

From then on, the hacking commenced, as our five teams worked throughout the afternoon and evening to translate their ideas into online realities. We even had some special datasets for participants to play with, access to which is still available here.

After breakfast the next day, we re-grouped and let the hackers present their work – testing interactive games, yawn detectors and more – as they competed for one of our AND Hack trophies. We were blown-away by how much had been built in such a short space of time; even by hackers with little (or no) technical skills, who had simply arrived with an urge to make something memorable. For a full debrief of all the projects, prizes and award winners, check out our blog post, which gives an insight into both the work produced and the producers. 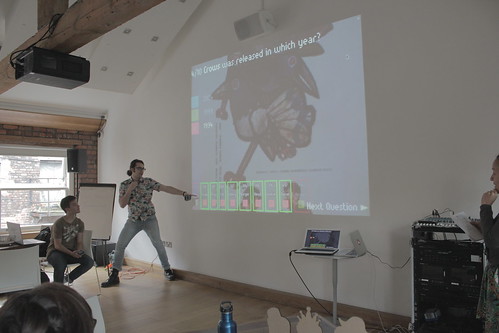 The project STREAMS was chosen for further development after creator, Luke Moody of Britdoc and Something Real, was awarded Best in Show at the Hack. Judges were impressed by his project’s feasibility, creativity, functionality and most importantly, because it championed access to specialist films.

What is STREAMS?
A search engine for independent film in the UK. The aspiration is for STREAMS to become a stimulus for distributors of independent film, to make sure their film catalogue is available online, on at least one VOD platform.

Why is STREAMS necessary?
New independent films face huge obstacles in digital distribution. Even if the audience is aware of the film, there are so many digital platforms out there that it can be impossible to find it. If independent film is to thrive then great cinema needs to be easy to find online and affordable to watch immediately.

How will it work?
The website will offer users simple functionality to find a film’s digital VOD cross-platform availability. If a film isn’t available, users will be able to submit a vote to ‘liberate’ the film.

‘Liberate’ a film?
Once a target number of votes are met, STREAMS will act a digital liberator, making these films available on VOD and ensuring a majority of profit goes to the producers directly.

Moody was supported by AND for further development of the search engine.

Supported by Film Hub North West Central, proud to be a partner of the BFI Film Audience Network.