I̶n̛t͘e͟rf̕e̢ren̵ce, created by COSMOS 2019 artist Julie Freeman, was a virtual reality experience where the endeavour of space exploration was revealed in an abstract data-informed world of celestial interference.

Interfering can be thought of as an unwelcome act – a network dropping out, white noise on screens, a notification amid silence – but without interference we might not encounter new perspectives or discover new stars. At Jodrell Bank Observatory, scientists see earthly interference as unhelpful noise or ‘dust’ in the data yet, in contrast, astrophysical interference can be invaluable. When combining data from multiple telescopes, wave interference models reveal useful data patterns, uncovering phenomenon such as pulsars.

I̶n̛t͘e͟rf̕e̢ren̵ce invited audiences to become deep-space pulsar-hunters, seeking out dying, spinning stars, pursuing the periodic pulses, then immersing themselves in each pulsar. Their presence in this intricate 3D pulsar labyrinth disrupted matter as time and space shifted – a new set of rules, a new datascape.

Using algorithmic techniques inspired by astrophysics wave interference patterns, I̶n̛t͘e͟rf̕e̢ren̵ce transported you to an organic visual and sonic landscape where the interchange between deep space data and knowledge exists.

A proof of concept for I̶n̛t͘e͟rf̕e̢ren̵ce was premiered at Bluedot Festival 19 – 21 July 2019. 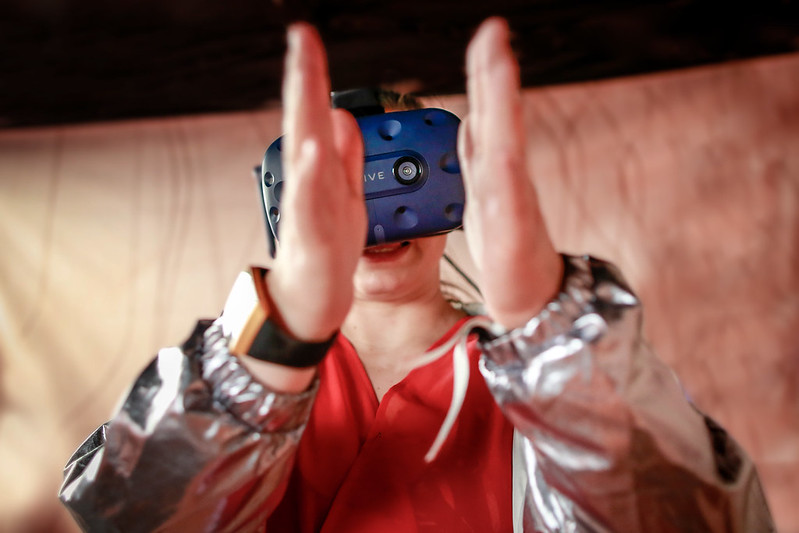 I̶n̛t͘e͟rf̕e̢ren̵ce was created by Julie Freeman, as part of COSMOS, the international artists commission and residency for the Lovell Telescope. Produced by Abandon Normal Devices, commissioned by Jodrell Bank Observatory, Abandon Normal Devices and Cheshire East Council as part of SHIFT. Supported by University of Manchester, bluedot, Arup, Kuva, with public funds from Arts Council England (ACE) and CreativeXR, a joint collaboration between Digital Catapult and ACE.